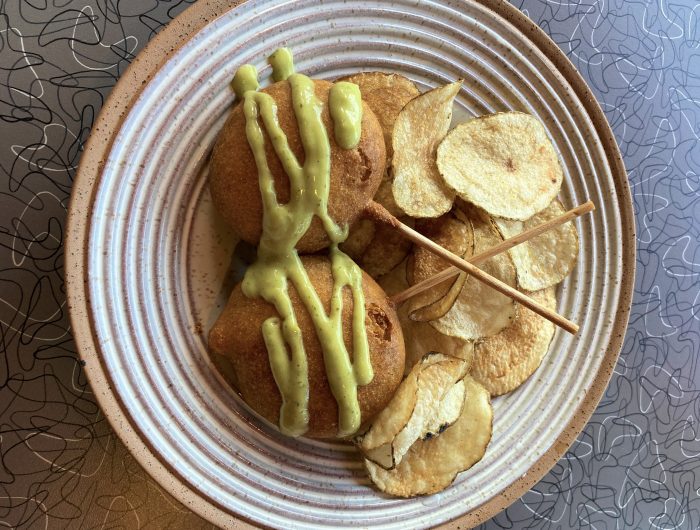 It’s a vegan meal on a stick

Among the 26 new foods that will be featured at the 2021 Minnesota State Fair is a ChoriPop, a vegan corndog on a stick.

It’s the creation of Andy’s Garage, whose owner Frank Chase will sell the ChoriPop at his food stand from Aug. 26 to 31 at the Fair’s International Bazaar. Chase has permanent, year-around restaurant locations at the Midtown Global Market and Uptown in Minneapolis.

This new vendor will also be serving deep fried tamales, cheese or chicken, and horchata soft-serve milkshakes and cones, the Fair said.

“We are taking our comfort foods and bringing them to the State Fair,” Chase said. “We tried to think of something new,” he added about the ChoriPop, which he calls a vegan lollipop on a stick

Getting accepted for the State Fair has been a boon for Chase after the Covid pandemic devastated restaurants for more than a year.

“We had (originally) hoped 2020 would be a banner year (for restaurant business),” he said. “But the pandemic cut us off at the knees.”

Chase said he hopes the Chori­Pop “hits it out of the park” with Fairgoers. “We hope to do well enough that we come back next year (to the Fair),” he said.

Meanwhile, State Fair officials said there will be nearly 500 foods available from 300 different concessions throughout the fairgrounds during the fair.

For a look at the rest of the new foods at the 2021 State Fair, check out this link: