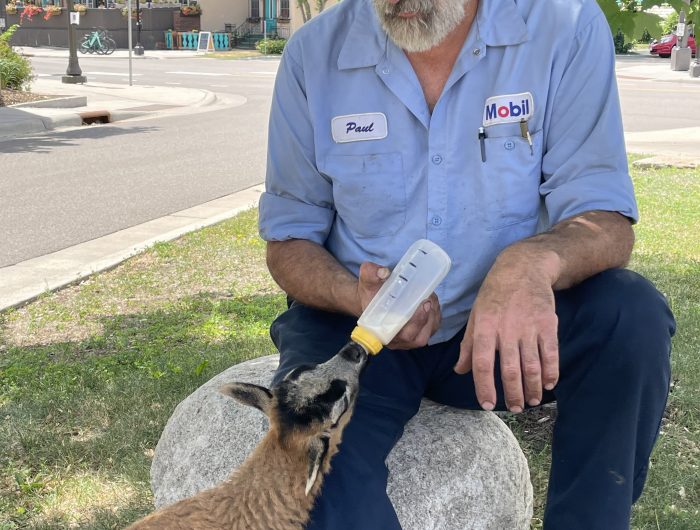 Park Service on Como Avenue in St. Anthony Park was busy with more than just automobiles on Friday, June 25. “Blaze,” a five- week-old American Blackbelly hair sheep, spent the day charming mechanics, customers and anyone who happened to walk by.

Paul Hueg, a mechanic at Park Service, currently has 33 sheep. After birthing triplets, two of which didn’t survive; Blaze’s mother rejected the lamb. Therefore, according to Hueg, Blaze must be bottle fed multiple times throughout the day.

To manage that intense feeding schedule that day in June, Hueg settled Blaze into a dog kennel, packed up some sheep formula and baby bottles, loaded everything into his pick-up truck and came to work.

“If I worked in an office, this probably wouldn’t work very well,” Hueg laughed. “But, my truck is parked by the back door. He (Blaze) ran around a little before work and during lunch. He’s fine. He knows how to watch out and we all watch out for him. As long as he doesn’t take me away from work, we’re good.”

During the short time it took to interview Hueg for this article, no less than seven people stopped to admire Blaze. After another bottle and lamb-nap, Hueg was planning to walk him down to the bank later that afternoon.

Fellow mechanic Aaron Jahnke said, smiling, “Blaze is a nice addition to the shop. We like him around here.”

When Blaze is not visiting Park Service, he spends his days running around and playing with Hueg’s 19 other lambs.

In addition to American Blackbelly sheep (and a few cats and dogs), Hueg also keeps Painted Desert sheep at his Sunset Elk Ranch, which is in Hammond, Wis. (Hueg’s namesake elk have been absent for a few years now.)

**Later update to Blaze’s story: Blaze was adopted on July 4th to a farm in Iowa to keep its existing American Blackbelly lamb company. “Blaze got his independence on July 4th too!” Hueg joked. Hueg’s animals are featured in a 14-minute YouTube video called “Whisker Woods Elk Adventure.” More information about American Blackbelly hair sheep can be found in that video. Here is the link: https://www.youtube.com/watch?v=aYQNTwNhQsE.