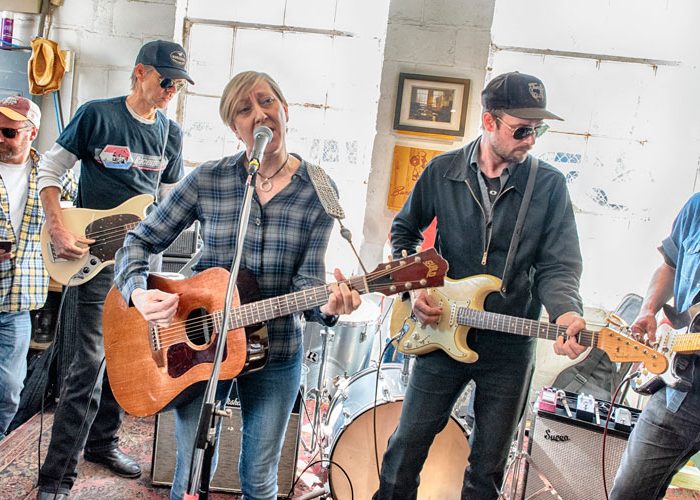 It’s never too late to pick up a guitar

Becky Kapell has no hesitation about describing herself: “I’m a superorganized person,” she says firmly. Not a surprising trait for the president of Magnetic Poetry, a company founded by Kapell’s brother more than 25 years ago. 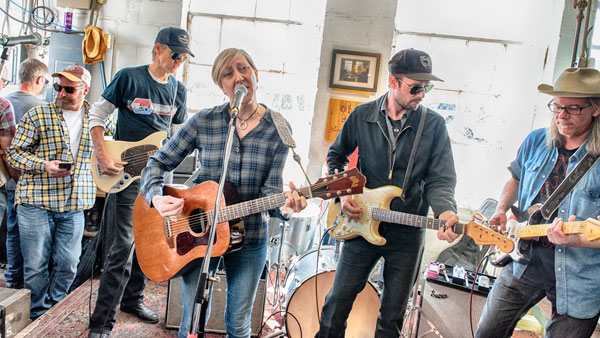 But Kapell also credits her organizational powers for her success in her “other life” as a professional singer/songwriter. And it’s the music career that she wants to talk about these days.

“I don’t read music. I don’t know music theory,” she says, “but I can visualize chord progressions. Writing a song is like a process of distilling thoughts into a single [statement]. … It creates order out of chaos.”

A regular performer at the Dubliner Pub on University Avenue until recently, Kapell, who lives in Como Park, will release her second CD, “That Certain Ache,” this month. She will mark the occasion with a public CD-release party on Friday, May 18, from 7 to 10 p.m. at the Hook and Ladder Theater and Lounge, 3010 Minnehaha Ave., Minneapolis.

It’s quite a feat for a single working mother who, until a few years ago, confined her musical interests to “sitting in the kitchen picking guitar when I had a little free time … teaching myself the only three chords that I already knew.”

Although she had sung with bands as a young woman when she lived in Portland, Ore., Kapell never considered herself a songwriter. She thought she had put performing behind her when she moved back to her native Twin Cities in 1996 with two young kids to raise.

To her surprise, she began composing songs. “Writing songs is something that happened to me,” she says. “The melodies started coming out, and then the words started coming.”

Kapell’s schedule at that point offered her little time to develop her talent. “I didn’t go out to hear music, because I was a single mom raising kids,” she says, adding that she didn’t know any other musicians in the Twin Cities at the time.

It wasn’t until she went back to Portland to visit the old friends of her youth that her music took a step forward. “I didn’t intend to make a CD,” she says. Musician friends encouraged her, however, and soon they brought in other musicians from the Portland area. In 2010, Kapell and her Oregon associates began recording her first CD, “For Now.”

Kapell describes “For Now” as “country folk” with an acoustic guitar sound and no percussion.

The new CD, “That Certain Ache,” has more of a “rockin’ country sound” that Kapell attributes to her contact with local Minnesota musicians. As her kids got older, Kapell found her way to area music venues, where she met guitarist Paul Bergen, who produced her CD. “Eventually, I got the guts to ask him to play with me,” Kapell says, and that experience changed her music.

“I could hear what he could add (artistically),” she says, and that new sound includes drums and electric instruments. “That Certain Ache” features Bergen on guitar, Erik Koskinen on drums and guitar, and Mike LeBeau on percussion.

Kapell’s musical heroes are classic country singers like Johnny Cash and Dolly Parton, but “I’ve been told I don’t sound like anybody,” she says.

As an untrained musician, she calls herself harmonically “innocent.”

“The musicians I play with say that my ‘superpower’ is that I don’t know how chords are ‘supposed’ to sound and progress,” she adds.

As a 54-year-old kick-starting a career in music, Kapell is older than many of her fellow musicians. “Many of the people I hang with are younger,” she says. “But I forget that I’m older, because I’m new to the music scene,” she says. “I’m young in musician years.”

Now young adults in their early 20s, her son and daughter have taken a hands-off approach to their mother’s new life in music. “They let it roll over them,” Kapell says. But once in a while, something more revelatory emerges. Kapell’s daughter posted a picture online of Kapell playing at the Dubliner on Mother’s Day last year. The caption read, “My mom’s not like all the other moms on Mother’s Day.”

Kapell says what she most enjoys about music these days is “the camaraderie of playing with musicians,” most of whom don’t even realize that she has a “whole other life” in the business world.

“I can just call up a musician friend [to play together]. It’s such a little, solid gift,” she says. “To create with other people is the best.”

It’s only when she is asked about her musical ambitions that the forthright Kapell displays a trace of uncharacteristic hesitancy. “I don’t think in those terms,” she says. “I don’t want to define myself . . . but I do have big aspirations. It’s not like I want to be famous, but it would be great to have a song played a lot on the radio. . . . I just have to have forward movement.”

Does she have any words of inspiration for aspiring midlife career-changers like herself? “I’m pursuing a passion that I didn’t know I had until I was older,” she says. “It’s not too late to pick up a guitar!”

You can find out more about Kapell’s upcoming musical plans on her website, beckykapell.com.