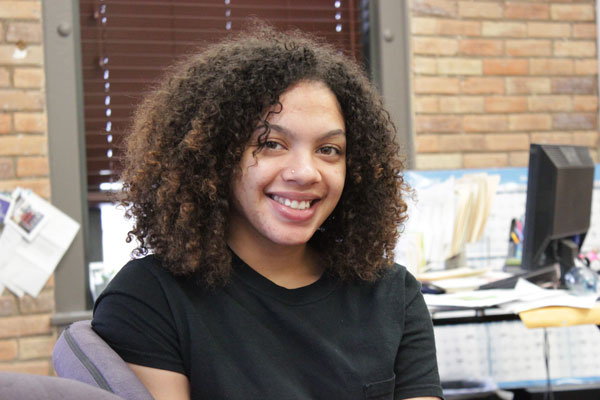 Robinson, a student representative on the Jennings School Board, was awarded for her work building community at Jennings, her leadership among her peers and her trailblazing spirit.

Cailin Rogers, community organizer for the District 12 Community Council and a member of the Jennings School Board, nominated Robinson for the award. Rogers accompanied the school on a trip to Puerto Rico last year, and that’s where she saw Robinson’s leadership skills.

“I was impressed,” Rogers said.

Robinson is just completing her junior year at Jennings. A resident of Lauderdale, she had attended Roseville Area High School but found the small project-based charter school on University Avenue a better fit for her. “It helped me a lot,” she said. “You have to be self-motivated here.”

Now, Robinson is exploring colleges. Howard University in Washington, D.C., is high on her list. She’s interested in psychology, and to that end recently completed a school project on bipolar depression. She created brochures that offered information about where a person can go to get help with the brain disorder and has been making presentations about what she has learned. This summer, Robinson will intern in a psychology lab at the University of Minnesota.

When Robinson received her award in May, she stood alongside Congressman Keith Ellison, who was also awarded a Polaris Leadership Award.