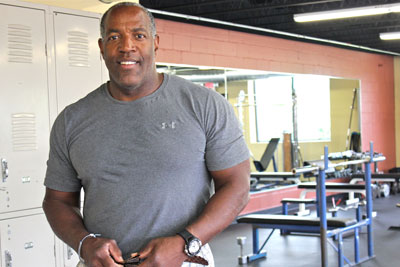 Jim Thomas, proprietor of JT’s Fitness at 1810 Como Ave., likes to emphasize the word “personal” when he refers to the training he provides at his new gym across from the Minnesota State Fair.

A longtime athlete and personal trainer since 1995, he says he loves what he does: help people become stronger, fitter and motivated. He offers one-on-one personal training and group sessions for two or more people.

After more than two decades at Fitness Express in the Commodore Hotel on Western Avenue in downtown St. Paul and just a year on Selby Avenue, Thomas moved his business to Como Avenue this summer. He brought all of his longtime clients with him, he says, and that includes doctors, lawyers, school superintendents and people who want to lose weight, get in shape or even gain the strength to climb mountains.

A native of Jackson, Miss., Thomas came to the Twin Cities in 1980 to follow a high school football coach who had accepted a job at Inver Hills Community College. His talent on the field took him to Utah State University, where he majored in sales and marketing and was named a First Team All-American football player. He went on to play with the Houston Oilers as an outside linebacker and then spent time as a professional wrestler with both the American Wrestling Association (AWA) and the World Wrestling Federation (WWF).

Thomas describes himself as “a personable guy,” and you can learn more about his business at www.jts-fitness.com.