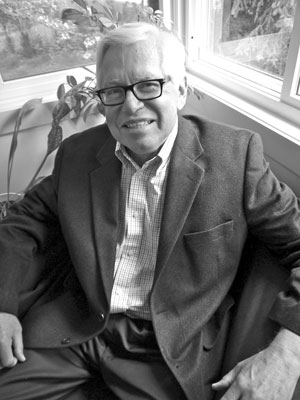 The Saint Anthony Park Community Foundation has announced that Kent Eklund is the recipient of the foundation’s 2015 Spirit of the Park Award.

Eklund and his wife, Katherine, have been St. Anthony Park residents since July 4, 1979. Over those three decades, he has held leadership positions on many neighborhood boards, including the Park Bugle, Sunrise Banks and the St. Anthony Park Lutheran Church.

Eklund was a founding member of the Saint Anthony Park Community Foundation and served as its second board chair, following Andy Boss.

According to Jon Schumacher, executive director of the foundation, it’s Eklund’s untitled role as mentor and consultant to many organizations and individuals in the community that has provided perhaps an even greater impact.

“Kent has been the unofficial consultant to this community for years,” Schumacher said. “He has expertise and experience in so many areas and always makes time when it comes to our neighborhood. He’s one of those rare leaders who shows up, whether it’s a high level strategic meeting or community event.”

Eklund has held many leadership positions over the years in the greater community as well, including president and CEO of Parkside Senior Services and the Ebenezer Society, vice president of market development with the old Lutheran Brotherhood and president of the Fairview Foundation. He also served as commissioner of two departments under Minnesota Gov. Al Quie and as mayor of the City of Northfield, Minn.

He is also the past chair of the board of directors at Courage Center (now Courage Kenny Rehabilitation Institute), chair of the strategic planning committee at the Greater Minneapolis Council of Churches and a member of the Sunrise Banks Strategic Advisory Board.

The inscription on the award captures the broad impact of Eklund’s community service: For a lifetime of providing leadership and support to communities near and far. For consistently and generously sharing his experience in government, education, nonprofit management and community service with our many neighborhood organizations. For helping to shape and faithfully nurture a community vision of inclusion, connectivity and sustainability.

The Spirit of the Park award was created by the Saint Anthony Park Community Foundation as an annual recognition on behalf of the community. The award is presented to a neighbor who has demonstrated an extraordinary dedication to the community. It will be presented to Eklund during the Fourth in the Park bandstand ceremonies in Langford Park after the parade on Saturday, July 4.