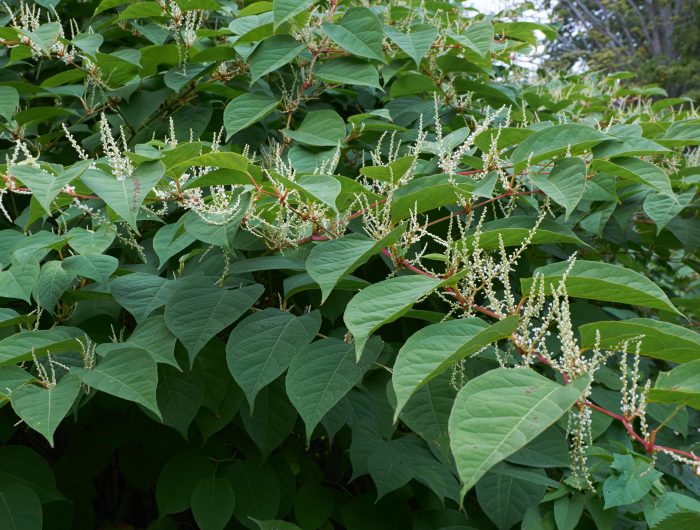 The masses of Japanese knotweed that snarled Seminary Pond in Lauderdale a few years ago have been mostly eradicated, leaving the next stage of the struggle against the invasive species to private properties adjacent to the pond.

Ramsey County officials have used several techniques, including herbicide applications, to fight the weed that is native to Asia and has no natural predators or competitors here to keep it in check. Knotweed was once popular as a garden plant but has escaped cultivation and commonly outcompetes other species in Minnesota parklands.

Justin Townsend, a Ramsey County environmental specialist, recently told the Bugle that he’s pleased with the progress on controlling the knotweed problem on the shores of the pond, which is west of Fulham Street and north of West Hoyt Avenue. At a recent meeting, Lauderdale City Council member Andy Moffatt ventured that the city might have had the worst knotweed patch in the county.

But now, that may be a dubious distinction of the past. Townsend said the eradication effort at Seminary Pond was so successful that a year ago, erosion became a problem as the knotweed’s roots came loose from the soil and emergency plantings were needed to replace them.

Further, Townsend said he has spotted native wildflowers poking up where the knotweed used to be, including Jack-in-the-pulpit and Solomon’s seal.

The state Board of Water and Soil Resources and the Minnesota Department of Agriculture helped fund the eradication project, which started after a contractor doing survey work reported seeing the knotweed patch in 2017.

A company hired by the county applied Rodeo and Trycera herbicides, then county staff and Conservation Corps interns followed with Milestone in upland areas and Rodeo nearer to the water, Townsend said.

“We have made incredible progress,” he said. “It is down to chasing a few dozen plants scattered throughout the site.”

Now, Townsend said he hopes the owners of adjacent properties will get in touch with him for help carrying the knotweed fight into their yards. He said there is grant money available for that effort, too.

Townsend said that although he tries to avoid using herbicides because of their danger to other species, the pernicious nature of knotweed doesn’t leave him many alternatives. But he added that knotweed in yards, which typically are “just lawn,” can more easily be dealt with by smothering the weed.

Townsend urges property owners near Seminary Pond to get in touch with him to identify the weed and get assistance tackling it.

“You can’t sell a house in the United Kingdom if it has knotweed,” Townsend said. “Let’s not let it get to that point here.”

Townsend can be reached by email at Justin.Townsend@co.ramsey.mn.us.

Anne Holzman is a Bugle freelancer who covers news from Falcon Heights and Lauderdale.