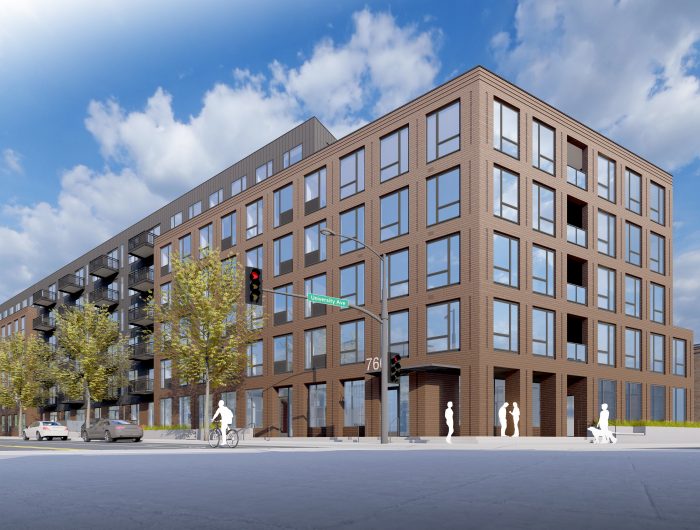 Construction is underway for a 220-unit apartment complex at the northeast corner of Raymond and University avenues, making it the latest housing project in St. Paul’s south St. Anthony Park area.

And its imminent arrival is being cautiously anticipated by the St. Anthony Park Community Council.

The developer, Minneapolis-­based Kraus-Anderson, expects to complete the $51.5 million, six-story project in June of 2022.

“We love the activity of the intersection and the history of the neighborhood,” said Tim Marco, Kraus-Anderson director of development. “We think this is an up-and-coming neighborhood that is also maintaining its history.”

Marco told the Bugle the apartment complex, which at the Bugle’s press deadline was unnamed, will feature a mix of market-rate studio, one- and two-bedroom units. The complex will have two levels of underground parking for residents and earmark 2,000 square feet for commercial use on the building’s first floor.

“We’ve worked closely with the St. Anthony Park Community Council and with the guidance of the City’s Heritage Preservation Commission to deliver a vision that will enhance and complement this strong and invested community,” Marco said.

He noted the one-acre site is one block from the light rail Metro Green Line station, offering residents easy access to mass transit. Kraus-Anderson bought the site from US Bank, which had a branch office there until the land sale and the construction firm tore down that building to commence the apartment complex.

Kraus-Anderson said its project, designed by Urbanworks Architecture, is being designed to appeal to young professionals with transit-oriented lifestyles. Besides underground parking, the project is scheduled to include a fitness center, outdoor courtyard with pool, clubroom, fully automated building access systems and rooftop patio.

The Kraus-Anderson project is the latest multi-unit complex slated to serve south St. Anthony Park. In recent years, other multi-unit residences have opened including the Platform Apartments, Milberry Apartments, Legends at Berry and Union Flats.

The imminent arrival of the Kraus-Anderson complex is of some concern to the St. Anthony Park District 12 Community Council.

“The diversity of housing should not just be for market-rate, single people, but also for families to support the schools, and seniors wanting to age in place, so new residents can move here at any phase of life,” contended Kathryn Murray, District 12 executive director. “Affordable housing should be built into every project, not separated by building.

“Additionally, public spaces need to be open to everyone—not nested in the back of new buildings, but facing the street,” Murray continued.

“The district councils have limited power to affect the type of housing going in. We receive notifications of requests for variances or zoning changes. However, the timing of such notifications is often not sufficient to engage with the community as much as they would like.

“The Unified Project Design Standards were adopted (in 2019) by the St. Anthony Park Community Council in partnership with the Creative Enterprise Zone, Prospect Park and Towerside (an innovation district) to address the large increase of developments coming into the neighborhoods, particularly along University Avenue,” Murray said. “The goal is that all new projects will be evaluated at the planning stage using the Design Standards and a scorecard evaluating the equity components of the project.”