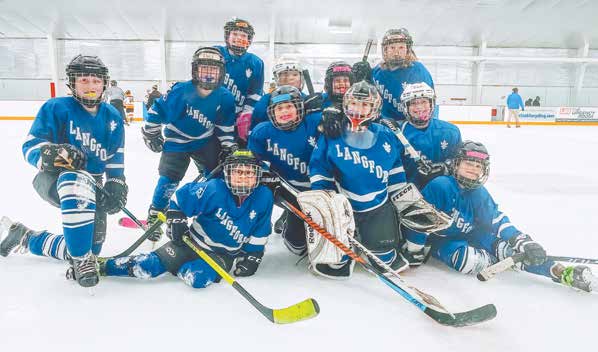 For the first time in its 80-year history, Langford Park hockey has an official all-girls team.

Coach Clayton Howatt reported the girls were extraordinarily excited to play. “Every last one of them played with more intensity and drive than I have ever seen from them before.” He added the team chose warm-up music that had “the most girl power.”

The dream of an all-girls hockey team has been long in the making. Howatt and program coordinator, Scott Hamilton, have been working for years to organize the team. Eighty years ago, all LP hockey teams were solely for boys. But beginning in the mid 1980’s, one or two pioneering girls would occasionally join a boys’ team. Today, all of LP’s teams are co-ed, while most of the teams LP plays are still all boys.

“Girls hockey is growing like crazy,” Howatt explained. They hope to build on this year, expanding the girls’ program in the future to include 10u and 12u teams. In addition, Howatt hopes to extend hockey’s borders, “I would love to see more girls of color have access to this amazing game and program.”

While overall participation in hockey has dropped in the past few decades, Hamilton says the Rec program at Langford has seen a steady increase. Both Hamilton and Howatt credit active families as well as dedicated rec center staff and volunteers. Coach Howatt also credits women athletes, like the Minnesota Gopher women’s hockey team, “Our girls have never known a time when there weren’t these women to look up to. When I was a kid, women’s hockey didn’t exist at any level, I’m so glad we have made progress.”

As for the girls themselves, they just love to play. “Hockey is my favorite sport and I love to play,” said Franny McNattin, a fifth grader and team member. “I go to Langford sometimes in the winter and will skate and shoot for at least two and a half hours. I am so pumped to be on an all-girls team.”

McNattin’s fourth grade teammate, Keegan Campos, said that “it feels pretty cool” to be on an all-girls team. “It’s fun to encourage my teammates and to be encouraged by them.”

Meanwhile, the lessons hockey has to offer will shape the girls for life. Kristin (Hogenson) Henkenius knows from experience. She was one of the first two girls to play Langford Park. She and teammate Shana Lohse played on a co-ed team from 1984-86.

Ali Granovsky, who played LP co-ed hockey from kindergarten through sixth grade, today is a senior at Roseville Area High School and plays center for the Raiders varsity hockey team. After graduation, she plans to play D3 women’s hockey at University of Wisconsin-Stevens Point.

When asked for comment on the new Langford Park girls’ team, Granovsky said, “It’s good to see that the girls’ game is growing and there are now opportunities where young girls can come together and play the game. Langford hockey is truly something special and I hope the girls cherish their hockey memories.”