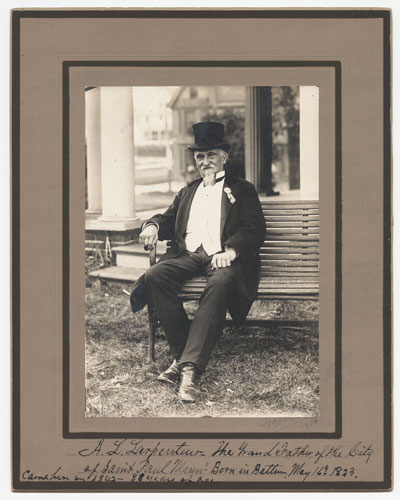 Larpenteur got a street named after him, but not the one he’d wanted

Auguste Larpenteur still cut a fine figure at 87 as he posed at the Anchorage in 1910. Photo courtesy of Minnesota Historical Society

In 1904, Auguste Larpenteur, 80, wrote to the St. Paul City Council with a forthright request: He wanted a street named after him.

The last of the city’s founders—often referred to as the Grandfather of St. Paul—he pointed out that his friends Henry Sibley and Louis Robert, gone by then, had their streets and it was high time he did, too.

Further, he suggested it would be appropriate to rename the street known as Lake Como and Phalen Avenue (now Arlington Avenue) in recognition of the role he had played in developing the land between Lakes Como and Phalen.

Larpenteur got his street, but instead of the one he wanted, it was a dusty country road, previously known as Minneapolis Avenue, that formed part of the northern boundary of the city.

If he were around today, Larpenteur would find the transformation of his street as amazing as the changes he had witnessed in St. Paul in the 19th century.

Larpenteur was born in Baltimore, Md., in 1823 and set out to seek his fortune to the west at the age of 18, arriving in St. Paul in 1843. He’d spent time in St. Louis, Mo., and there met Mary Josephine Presley, who later followed him to St. Paul and became his wife.

St. Paul at that time was a collection of hovels scarcely big enough to be called a hamlet, much less a town, and was part of St. Croix County, Wisconsin Territory.

He worked for a firm of Indian traders as a clerk and interpreter and in 1846 built the first frame house in St. Paul at Third and Jackson streets.

After Wisconsin was granted statehood, Larpenteur was among the pioneers who met in convention at Stillwater in 1848. They successfully petitioned the Wisconsin governor to allow the election of a delegate to Washington, D.C., to lobby for the establishment of the Minnesota Territory, which was accomplished in 1849.

Larpenteur supported his growing family—he and his wife ultimately had 10 children—by fur trading, dealing in wholesale groceries and speculating in real estate. He served on the city council and also was treasurer of Ramsey County.

In 1860, he built his stone mansion, the Anchorage, just across the city’s western border, Dale Street, about where I-94 crosses it today. He lived there for more than 50 years.

Writing in 1885, when Larpenteur was in his early 60s, one newspaperman described him this way: “Mr. Larpenteur is of French descent and consequently is all life and animation. He has a nervous, sanguine temperament; possesses a black, piercing eye; is of medium size; always pleasant, very quick; talks quickly, acts quickly, figures quickly. Judging from what he now is, one would think he must have been ‘chain lightning’ when young.”

Following trips to France and California, Larpenteur retired from business, but remained active in public affairs, serving on the committee planning the new Cathedral of St. Paul at the start of the 20th century.

He also was faithful in attendance at the annual meetings of the Old Settlers Association and the Minnesota Territorial Pioneers, and during the Minnesota State Fair he held court at the latter organization’s log cabin exhibit. Larpenteur was familiar to the readers of St. Paul newspapers because he was invariably consulted by reporters concerning the passing of an old-timer or other historical milestones.

According to one newspaper account, “Mr. Larpenteur delighted in making one of a friendly circle in his home and his pleasure was without alloy when he could join a little company of pioneers and talk over the days when the Indian tepee was conspicuous on the hills now included in the city limits.”

His beloved wife, Mary, passed away and with his own health beginning to decline, Larpenteur moved in with one of his daughters in 1917, dying two years later at the age of 95.