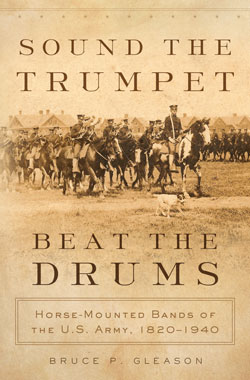 Bruce Gleason in his writing studio. Photo by Roger Bergerson

There was something about the photograph he saw all those years ago that struck a chord with Bruce Gleason.

The image was that of a member of the band of the Queen of England’s Household Cavalry Life Guards, and in addition to the pomp and circumstance it conveyed, there was added appeal. The fellow in the photograph was playing the euphonium, a small tuba, and young Gleason did, too, in the University of Minnesota Marching Band.

“The photo of a well-trained musician serving amidst the historic traditions, uniforms, gallant music and well-bred horses of a mounted band planted itself in my mind, where it stayed for three decades,” Gleason says.

His book, Sound the Trumpet, Beat the Drums, Horse-Mounted Bands of the U.S. Army, 1820-1940, documents one phase of the career-long research that resulted.

The Lauderdale resident is a music educator and historian long associated with the University of St. Thomas Department of Music. Gleason also serves as artistic director of the Owatonna (Minn.) Symphony Orchestra and is senior choirmaster for Diamond Lake Lutheran Church in Minneapolis.

He explains that when the Crusaders arrived in the Holy Land in 1095, they encountered Islamic military forces using kettledrums mounted on various beasts of burden, horses among them, to rally their troops and intimidate the enemy.

The raucous din had the desired effect and the Europeans were sufficiently impressed to adopt the practice themselves. Their cavalry bands down through the ages gradually evolved to brass instruments such as trumpets and horns, as did the young U.S. Army following the War of Independence.

Gleason initially focused on European mounted music and he traveled to a half-dozen countries in Europe and the Middle East to observe bands still in existence there. He subsequently wrote a series of journal articles on the European tradition, but found no takers when it came to publishing a book.

He had also researched and published articles about the mounted Army bands in America and decided that maybe that was the book. He broadened and deepened his study, from the founding of the bands, through the Civil and Indian Wars, on to their later National Guard counterparts.

Assembling a mounted band was a complicated process. Despite the rural nature of much of America in the 19th century, many recruits didn’t know how to ride a horse, to say nothing of playing an instrument at the same time. And the hardest part of all may have been training horses to tolerate the noise.

Over time, woodwinds were added to the musical ensemble, Gleason says, so that by the turn of the 20th century, these were essentially fully instrumented concert bands on horseback.

Historically, musicians were regarded as noncombatants and kept out of harm’s way, Gleason noted. However, Gen. George Custer placed the band at the front of his soldiers when heading into conflict. Fortunately for the band members, on the eve of the Battle of the Little Bighorn, Custer decided he needed their horses for possible remounts the next day. They were among the few federal troops to survive the battle.

The tradition of mounted bands in the U.S. Army sputtered to an end by the start of World War II, as horses generally were replaced by mechanization. Gleason also says that in the turmoil and emerging issues of the time, people cared less for that type of ceremonial showmanship.

Gleason interviewed nine former U.S. Cavalry musicians who served in Army and National Guard units between 1929 and 1941 in order to document those final years.

And this time he found a publisher: the University of Oklahoma Press, which specializes in military history.

“I was naïve about how long all this would take,” he said.

The Barnes & Noble store in HarMar Mall will host a discussion of Sound the Trumpet, Beat the Drums and a book signing by Gleason Monday, Oct. 17, at 7 p.m.