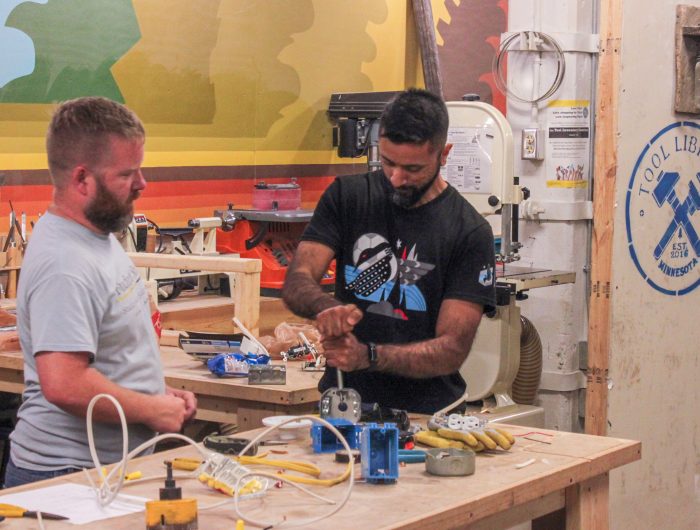 The Minnesota Tool Library, with two locations in the Twin Cities, is one of the largest tool-lending libraries in the world.

Bugle readers may be surprised to learn that this resource is located conveniently near the south St. Anthony Park neighborhood.

This local nonprofit was founded in 2015 in northeast Minneapolis, followed in 2017 with the opening of its St. Paul facility.

Tucked away in the basement of the historic Prior Works building at 755 Prior Ave., the 1,500-square-foot locale in St. Paul is chock full of nearly every tool imaginable.

“If you can think of a project, we likely have the tools to do it,” said Kate Hersey, Tool Library executive director and a graduate of Central High School. The store has four part-time branch managers, an active board of directors and a volunteer leadership team.

More than 7,000 lendable items are contained in the Tool Library’s online catalog, Hersey said. These include standard hand and power tools along with an extensive assortment of tools for home improvement, woodworking, electrical, plumbing and lawn and garden projects, she added. Ninety percent of the available tools are donated, and after being refurbished or repaired they are added to the curated collection.

The tool library’s primary goals are to reduce waste, create equitable communities and empower people to reinvest in their homes, Hersey said. The Tool Library is a $120,000 annual operation funded by membership dues, class fees, late charges, donations and grants.

The Tool Library also offers a well-appointed “makerspace,” which is a common area where members of all skill levels can work on their own projects. A drum sander, a lathe, a thickness planer and the multipurpose SawStop table saw are just a few of the sizable tools available at the St. Paul branch.

On-site support is available from shop mentors during the weekend hours when the MTL is open. Additionally, classes are offered for novices, expert craftspeople and everyone in between. Hersey said that its non-judgmental, low-key environment is welcoming to all community members even if they are inexperienced with tools.

The Tool Library was the brainchild of Thomas Ebert and Zach Wefel. After meeting in Minneapolis in 2014 they discussed the concept of a tool library. Slowly, they began to garner community support, culminating with the establishment of the MTL the following year.

Currently, there are over 1,000 active tool library members, with nearly 50 residing in the 55108 St. Anthony Park ZIP Code area. The Tool Library’s Minneapolis location is in the Thorp Building, 1620 N.E. Central Ave.

More than 20,000 loans were made in 2021, and many of those were for multiple tools, Hersey said. Premium, standard and basic membership levels are available along with scholarships.

Gift memberships are a terrific idea even for individuals with plenty of tools, Hersey noted, since there will undoubtedly be a time when a different tool is required. Borrowing instead of buying tools is the environmentally conscious option, and another way to benefit the community, she added.

Hersey said many volunteer opportunities are available at the Tool Library including tool librarian and maintenance, fundraising as well as writing online instructions, social media content or grant applications. Volunteers may work at either tool library location or from home.

If you would like to develop or broaden your skills and expertise, reclaim control of your garage or basement or simply be enticed by the MTL’s prodigious treasure trove, you may want to stop in for a tour and consider membership.

Or, perhaps consider lending your time and talent to help expand the reach and offerings of this nonprofit.

Janet Wight, a resident of Como Park where she lives with her husband and daughters, is a new, contributing freelance writer to the Bugle.