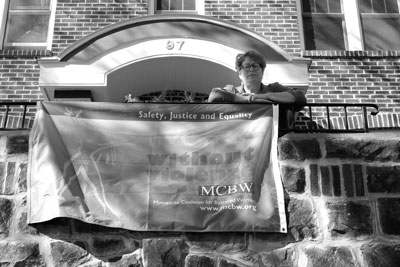 Liz Richards, executive director of the Minnesota Coalition for Battered Women, raises the Live Free Without Violence flag to honor people who have been killed due to intimate partner violence. Photo by Kristal Leebrick

Liz Richards draped her Live Free Without Violence flag from the brick railings at 97 Langford Park in St. Anthony Park for most of October to honor four people killed in 2014 due to intimate partner violence.

She raised it for two weeks, beginning on Oct. 9, to honor Amelia Analesse Ramirez and Amber Elena Lechuga. Amelia, a 13-month-old from Cottage Grove, died on March 15 as a result of multiple blunt-force traumatic injuries caused by her father, who admitted during questioning that the night before Amelia died he was upset with the child’s mother so he went to the infant’s crib and punched her in the stomach and in the back of the head.

Lechuga, 22, was killed by a gunshot wound to the head on Sept. 25 in Springfield, Minn. Her boyfriend, Miguel Angel Vasquez, has been charged with her murder.

Richards had just taken down the flag when she received word that more than 500 flags, lawn signs and banners would be raised on Oct. 18 to honor 85-year-old Lorraine Swor of Minneapolis, who was killed by her husband in a murder-suicide on Oct. 6.

The Minnesota Coalition for Battered Women (MCBW) sent out another press release on Oct. 23, asking people to raise their flags in honor of Angel Linderman, 28, a Lake City woman who was shot to death on Sept. 9 by her boyfriend, who has been charged with felony counts of first-degree intentional homicide, hiding a corpse and possession of a firearm by a felon. October was national Domestic Violence Awareness Month, but the MCBW wants its Live Free Without Violence public-awareness campaign to keep the conversation about domestic violence going the entire year.

Richards, executive director of the MCBW, said the campaign began as a way to connect people throughout the state when someone dies at the hands of an intimate partner. For more than 30 years, the MCBW has released its annual Femicide Report, which documents domestic violence in Minnesota.

“When we put out information about homicide, people feel awful and hopeless and helpless,” Richards said. “The flag campaign is a way for us to try to do something.” A homicide in Park Rapids impacts “all of us at some level,” she said. The flags “open the door to conversation. It’s an easy way to put out an image that says, ‘We would love to live in a community where there isn’t violence, where this doesn’t happen,’ and to honor the life that was lost.”

Now, the more than 500 individuals and organizations that are part of the flag campaign are notified whenever there is a domestic violence homicide in Minnesota and are asked to display the flag for one week in memory of the victim and to help raise public awareness of domestic violence in their communities. Richard’s condo association joined the campaign in October.

The MCBW sells flags, banners and yard signs at cost and is looking at producing inexpensive window decals to display on vehicles. The coalition will also supply social media images for people to post on their Facebook pages at no cost.