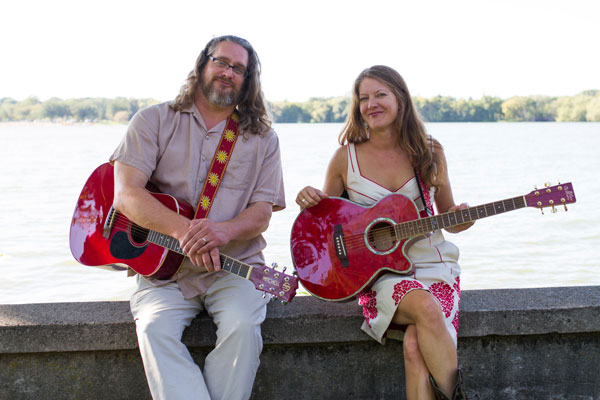 Footfall is Jim Christiansen, Debbie Cushman, six hard-working guitars
and a mandolin named Honey. Singing and songwriting is shared, and their
cover songs showcase the musicians who have influenced them the most,
including Jay Farrar (Uncle Tupelo, Son Volt), Hank Williams, Sr. and
Bob Dylan. The title track from this new CD has been stopping listeners
mid-sentence, bringing coffee house venues like Gingko to pin-drop
quiet.

Bandmates on and off for over 15 years, in various incarnations,
the Footfall duo really crystallized about five years ago.  Their first album, Running Toward the Moon (2014), was picked up by a Triple-A radio promoter in New York
City and got spins on over 50 stations across the US and northern
Europe.

Christiansen, originally from Falcon Heights, will return to familiar
stomping grounds with this show. As a Hamline University student and
member of the Pipers swim team, he spent a number of years in and around
the neighborhood prior to embarking on a career as a high school science
teacher. Cushman works her day job as a nonprofit administrator just a
couple of blocks away from the vinyl store. A Wisconsin transplant,
she’s set down roots just on the other side of I-94 in nearby Merriam
Park.