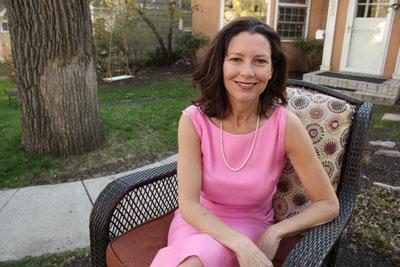 “There once was a union maid, she never was afraid / Of goons and ginks and company finks . . .” Woody Guthrie, “The Union Maid”

Union membership is down, and many Americans don’t remember much about the great strikes of the past, but St. Anthony Park author Megan Marsnik is out to change that.

In the pages of Marsnik’s new historical novel, Under Ground, the battle cry is “Organize!” and the Union Maid—fearless, resolute and tough as nails—is once more ready to take her place in the frontlines of the struggle.

Starting Sunday, May 24, Star Tribune readers will get a chance to learn more about a chapter of Minnesota history that is rarely heard about these days. Under Ground won the newspaper’s summer serial contest this year, and readers will be able to follow daily the adventures of 16-year-old Katya, a Slovenian immigrant, who falls in love with a union man and arrives on Minnesota’s Iron Range just in time for the great Miners’ Strike of 1916.

Based on a real incident from a once-famous Minnesota strike, Under Ground has its share of strong female characters.

“I look for strong female characters who aren’t victims,” says Marsnik, “and the women of the Range are the strongest women I know.”

Marsnik was especially interested in portraying the women married to the strikers, she says, women who were able to keep the family together when the money wasn’t coming in, and who were even prepared to take their husbands’ places on the picket lines when the men were overcome by the company’s private police force of strikebreakers and hired thugs.

Marsnik grew up in Biwabik, the granddaughter of an immigrant miner and his indomitable wife. Her grandfather was once blacklisted for his union activities, and Marsnik says, “Tales of the [1916] strike were as common to me as bedtime stories.”

It wasn’t until she came down to the Twin Cities for college that Marsnik, 45, realized that not everyone thought residents of the Range were fashioned from a heroic mold.

“Some people think the people from the Iron Range are narrow-minded or simple,” she says, and then she tells a story about one of her professors.

When she asked him for a letter of recommendation, he was happy to comply, but he remarked that he “had never expected anyone who came from the Range to be that smart.”

He meant no personal offense, says Marsnik, but the words stung. What might have hurt more was an incident at her 20th high school reunion in Biwabik.

“There were people there who were union bashing,” says Marsnik. “People who didn’t understand how much blood had been shed and the importance unions had in establishing human dignity.”

Marsnik decided to set the record straight about the Range. It’s a place “where people are readers with a huge passion for education” and “have the highest voting record in the state” but also “ a place where people stay connected really strongly to family and community. [Iron Rangers] were living off the land before it was cool,” says Marsnik.

In 1916, it was more diverse than anywhere else in the state, where immigrants speaking 37 languages were working at “these terrible jobs. Discriminated against and dehumanized in the [taconite] mines.”

Worried that the stalwart immigrant identity of the Range is fading, Marsnik wanted to write a book to remind the area of its heritage. She began writing the novel nearly six years ago, working on it in early morning before leaving for her job as a high school English teacher in Minneapolis. Summer vacations and a sabbatical year gave her additional time to write. Walking was a critical part of the creative process.

Marsnik’s routine involved walking her daughters to school at St. Anthony Park Elementary School and then taking the long way home, “letting the characters talk” to her. Her daughters, who were 9 and 11 when she started the book, also wanted their say. They advised their mother to add a “wizard or a dragon” to the storyline. The girls are now in their teens, and Marsnik reports that the book remains “proudly dragon-free.”

She entered the Star Tribune contest “on a lark,” she says. “My mother-in-law told me to send it in.” “About a minute later” she sent off a 22-page excerpt to the newspaper and a week after that, she learned that she was one of three finalists.

Noting that the book hadn’t been written with a newspaper in mind, Marsnik says that one of her first editorial tasks was to take out “all the saucy parts that wouldn’t fit in a family newspaper.”

Happily, plenty of engaging material remained, and a few months later Marsnik got word that she had won.

“I’ve always been interested in history,” says Marsnik, “particularly from the Iron Range.” She put in months of research on Under Ground, but her interest was initially sparked during summers she spent working at the Iron Range Research Center in Chisholm, collecting oral histories of women of the Range. Still, she was never tempted to write a straight history of the 1916 strike.

“I love history,” she says, “but I love stories more. I love to get an introduction to history through a story.”

She is also aware that historical fiction can inspire the present as well as portray the past. As a teacher, she reinvented her curriculum in fall 2014, after the controversial police shooting of Michael Brown in Ferguson, Mo.

“My students knew it was a horrible injustice, but they didn’t know if their protest would matter,” she says. “But that’s just what my book is about: We live in a society where people wonder what the little guy can do. The people who sacrifice for change rarely reap the benefits. The 1916 strike changed labor, even though they lost.”

Her book, Marsnik says, tries to relate the strikers’ vision of “how to make the world a better and more dignified place. The Rangers’ fight was always for dignity.”

Judy Woodward is a reference librarian at the Roseville Library and a regular contributor to the Park Bugle.