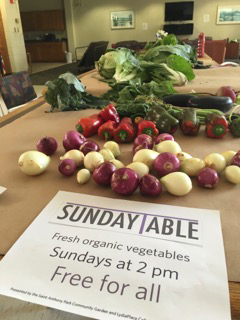 Food — growing it with current farming methods and moving it to sell — puts a lot of carbon into the atmosphere. Growing your own food takes some of that carbon out of the process. Growing food for people who don’t have garden space or the money to grow their own has the added benefit of improving health and building community connections.

Three of those plots are reserved to grow food that is distributed at Seal Hi-Rise, a public-housing apartment building five blocks south of the gardens on Raymond. Gardeners volunteer throughout the summer to tend the three plots, along with their own, and then more volunteers harvest and weigh the produce once or twice a week through late summer and fall. Volunteers can do the harvesting on Saturday evening or Sunday morning.

The program — called the Sunday Table because the vegetables are literally spread out on a table for Seal residents to select from — has been coordinated by two of the gardeners, Lois Braun and Sherman Eagles, with distribution on Sundays by Scott Simmons of Lydia Place, a Lutheran ministry based in South St. Anthony. Last year, it distributed 1,130 pounds of produce. In 2016, it was 1,260 pounds.

“For three years before that, we delivered the veggies to the food shelf at Keystone Community Services on University Avenue,” said Braun, “but deliveries had to be made between 10 and 3 [p.m.] on weekdays, and few of our volunteers couldn’t take those hours off work. And we couldn’t grow popular veggies like green beans, zucchini or cucumbers because they need to be picked on a regular schedule.”

The Sunday Table welcomes produce donations from other neighborhood gardens, as well. After mid-July, you can leave your extra produce on the shady north side of the shed at the east end of the community garden on Sundays before noon. The produce will be delivered to Seal Hi-Rise with the rest of the vegetables.

To help out with growing or harvesting for the Sunday Table, email seagles@softwarecpr.com. There’s also a community garden in the Como Park neighborhood, just east of Snelling near Como Avenue, where growers are encouraged to donate their extra produce. Find out more from the District 10 Como Community Council, district10@district10comopark.org.

Gardening at Murray and Jennings

Science teacher Tim Chase says Murray’s work started last year, when his Environmental Inquiry Immersion students wanted to take advantage of the pollinator garden that was planted by the class in 2016. They knew they could get the bees to help people who didn’t have enough to eat. This year students from the Magnet Science II classes are also involved.

Currently Murray has nine raised beds waiting to be planted with vegetables, and Chase and the students plan to add five fruit trees this spring. They are working with Tree Trust to figure out which fruits to plant, based on timing harvests throughout the season and the need for cross-pollination between cultivars. The students started their vegetable plants from seed in early April and will plant them in May and June, before school ends.

All of the food grown at Murray last year — more than 500 pounds of tomatoes, broccoli, onions and cabbage — went to the food shelf at Keystone. “We hope to do more this year,” Chase said, “if we can find a way to keep the turkeys from devouring some of our produce.”

Students sign up to weed for a week during the summer. When the new students return in fall, they will harvest. To cover the summer months, Chase recruits volunteer partners from the St. Anthony Park Garden Club to pick up any slack in weeding. Last year, he did most of the summer harvesting, but he’s interested in growing connections with other groups and volunteers to be part of the harvesting to increase capacity and make the program more stable in the long term.

Email timothy.chase@spps.org if you’d like to help in the Murray garden this summer.

Meanwhile in 2017, students at Jennings were working with their teacher Aaron Bloom to build two raised beds in a grassy area between parking lots behind the school on University Avenue. Working with expert gardeners from A Back Yard Farm, they filled the beds with lettuce, beans, tomatoes and squash for donation at the Keystone food shelf.

This spring and summer Bloom and the students hope to add perennial fruits, such as strawberries, raspberries and blueberries, and may shift to taking the produce to Seal Hi-Rise, which is just a few blocks away. Students will work outside an hour a week in spring, and then sign up for hours during the summer to weed and harvest.

Nadine Horchner has taken a different angle on growing edibles for people to eat. Inspired by the Incredible Edible movement in the United Kingdom, she started a local chapter in partnership with the St. Anthony Park Garden Club, Eagle Scouts, Transition Town and St. Paul Parks and Rec, and a lot of neighbors. In just one season last year, the St. Anthony Park Incredible Edible (IE) project planted fruit trees and bushes and pollinator-friendly plants on the corner of College Park at Raymond and Carter avenues; apple trees in Monkey Island Park at Branston Street and Hendon Avenue; and herbs at the St. Anthony Park Library, 2245 Como Ave. This spring, IE will expand to plant a bed with edibles at Langford Park as well.

Fruit and herbs in the IE beds are available for people to pick as needed. College Park, for instance, will have currants, raspberries, strawberries and sour-pie cherries as the plants mature. Last year, the library had plenty of rosemary, basil, parsley, sage and lavender to share. Horchner is exploring more perennial edibles, too, like chives, sorrel, oregano and rhubarb.

“I would like kids to be able to run or bike to little berry patches in the neighborhood and graze on healthy berries in the summer,” she said.

As a new resident in St. Anthony Park, Horchner said she met many people through IE she would not have otherwise. Planning meetings take place over homemade soup, and the volunteers gathered for a harvest potluck to celebrate in fall.

“Community resilience depends on interpersonal relationships and part of IE’s goal is to bring neighbors together and work with local community groups,” Horchner said.

All of IE’s work is done by volunteers. If you would like to help with an IE garden near you, email nadinehorchner@gmail.com.

Want to get involved?

Pat Thompson
Pat Thompson is a member of Transition Town – All St. Anthony Park who spends her time thinking about and working on transportation, gardening, and community-ownership. With Mindy Keskinen, she coordinates the Park Bugle's column from TT-ASAP, featuring a variety of local voices on climate and resiliency topics. Working toward a "smaller footprint, stronger community" since 2013, the group finds neighborhood-based ways to take action on climate change: learn more at TransitionASAP.org and drop in on a monthly meeting. Open to all, the group is part of a larger movement of municipalities transitioning from fossil-fuel-based ways of life to more eco-friendly, equitable practices. To browse their past columns by topic, visit TransitionASAP.org/park-bugle-columns. They welcome your ideas: reach Pat at transportation@transitionasap.org or Mindy at communications@transitionasap.org.