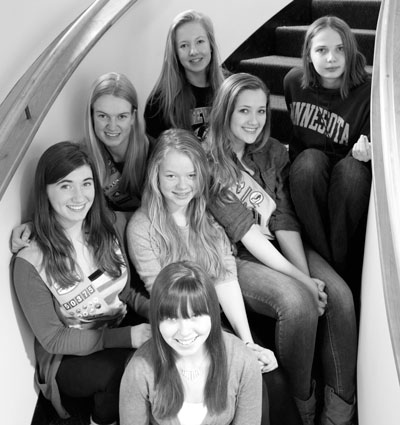 What do seven ninth-grade Girl Scouts from five high schools do to broaden their horizons and develop stronger bonds? Why, go to London, of course, the birthplace of the 100-year-old scouting organization.

The members of Girl Scout Troop 50375 will stay at Pax Lodge in Hampstead, North London, next to the world headquarters of the World Association of Girl Guides and Girl Scouts (WAGGGS), in August. Their trip includes a two-night stay on Brownsea Island, the site of the first-ever scout camp, where they will be doing a community service project.

The troop had planned to go to England last year during the Girl Scouts centennial, but the Olympics in London (and not quite having enough money) made them decide this year would be better.

The troop began with 13 members, but some girls quit as they got older to devote more time to outside interests. Annelia Anderson, Frances Fuller, Fiona Steen, Ellie Thorsgaard, Elysia Gauthier, Amanda Baden and Maxine Lightfoot stayed in the troop. Though these girls are also involved in such varied activities as dance, opera, music lessons, painting, swimming, volleyball, lacrosse and writing (as well as maintaining their status as “A” students), they have managed to stay committed to scouting as well. Their current leaders, Rita Goodrich and Sarah Anderson, will accompany them on the trip, along with Amy Tomczyk.

When the girls were in fourth grade, then-troop leader Greta Gauthier asked them to brainstorm about what they wanted to do as a troop. They wrote their ideas on Post-it notes and organized the notes into things that would be easy to do—short field trips or making things—and things that would count as “dreaming big”—staying at one of the four world centers of WAGGGS. London won.

Such a trip involves a lot of planning and major-league fundraising. The troop had two rules: (1) All money is troop money—if you quit, the money stays with the troop. (2) All troop members go together—if anyone had financial constraints, the trip would be scaled back. Through a lot of creativity and diligence, the scouts raised enough money for the stay in London and Brownsea. Parents are paying for airfare, and the girls are providing their own spending money.

In the last four years, the girls have sold cookies, participated in the neighborhood garage sale, sold crafts (Scrabble necklaces, coasters and a neighborhood calendar created and printed by Ellie Thorsgaard) at Shop Home for the Holidays in December at Milton Square, sold water and soft drinks to State Fair attendees and will be the recipients of the Park Perks program at the Park Midway Bank, 2300 Como Ave., in April. The bank will donate profits from coffee sales in its lobby that month to the troop.

Fundraising isn’t the only Girl Scout activity the girls have participated in over the last few years. They’ve gone camping, taken part in the Girls Scouts 100th anniversary celebration at the Mall of America and earned the organization’s Bronze Award for community service for a project they did with the Animal Humane Society. They made beds, tags and treats for the animals.

While in London, the girls will stay at Pax Lodge, a communal facility that accommodates 59 people and attracts girls from all over the world. They will participate in leadership and advocacy programs at the lodge and tour London. They are looking forward to riding the London Eye, seeing “Wicked” at the theater, visiting the Tower of London and taking various tours such as the Harry Potter tour and a ghost tour.

Girl Guides began in 1910, after the first Boy Scout Rally was “crashed” by a group of girls wanting “something for girls too.”Girls had sometimes joined in with their male counterparts in scouting activities, but Robert Baden-Powell thought that they needed their own organization. He recruited his sister, Agnes Baden-Powell, as the first leader, and in 1912 his wife, Olave Baden-Powell, took a leading role in the development of Girl Guiding and Girl Scouting. Juliette Low of Savannah, Georgia, met Baden-Powell in 1911 and was inspired to found the Girl Scouts of the USA, which she began in her home on March 12, 1912, with 18 girls. Though nearly deaf, Low dedicated herself to the organization, bringing girls from all walks of life and with disabilities into the outdoors. She felt they needed to be physically fit and emphasized athletics (she was a swimmer, tennis player and rowed on a crew team) as well as homemaking skills and preparation for working outside the home in the arts, sciences and business.

From the original 18 girls, Girl Scouting has grown to more than 3.7 million members and is the largest educational organization for girls in the world.

The St. Anthony Park scouts are looking forward to seeing the birthplace of the Girl Scouts, meeting their counterparts from all over the world, having a real English tea and forming even stronger bonds with their friends in the troop (and for most, leaving the country for the first time). The girls and leaders emphasize how much they appreciate the support of the community and look forward to sharing stories of London when they return.