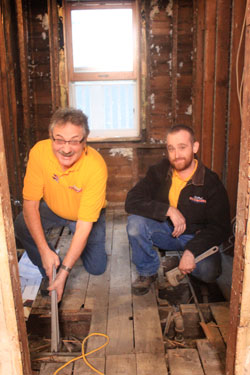 Local plumbers get a crash course in bathroom renovation

Local plumbers Charlie Avoles and Phil Quinlan of St. Paul Pipeworks will make their television debut on Monday, Feb. 24, when the show Bath Crashers on the D.I.Y. Network documents the remodel of a bathroom in a home in the Whittier neighborhood of Minneapolis.

A wholesaler that Avoles and Quinland work with suggested St. Paul Pipeworks to the producers of the show.

Bath Crashers is a reality TV show that has its host, Matt Muenster, cruising the aisles of a home supply center looking for people who are planning to remodel their bathroom. “He sort of ambushes them and says, ‘Well, let’s go do it right now,’” Avoles said.

Except they don’t exactly go do it now. The show works under the premise that the bath is transformed in three days. The actual shooting schedule is six days, which is a pretty tight schedule to remodel a bathroom, Avoles said.

“Workers were crawling all over each other and there was almost always a contractor working very late into the night, usually 2 to 3 a.m.,” he said.

The Minneapolis project, which took place in early November, began with a 5-by-8-foot bathroom with three features—a toilet, sink and bathtub—that was expanded into a small bedroom next to the bathroom. The new room added more square footage, a second sink and a large walk-in shower.

The wall that came down between the two rooms was the “plumbing wall,” which is where all the pipes are hidden, Avoles said. And those hidden pipes brought a few surprises to the pair.

“We literally had to work magic to get the waste piping to work for all of the fixtures,” he said, and do it with minimal damage to the main floor below and the master bedroom above the bathroom.

Charlie Avoles and Phil Quinlan make their television debut on the show Bath Crashers on Feb. 24.

Avoles said he and Quinlan may get a spotlight on the show, as they solved an unusual plumbing challenge. “The existing large 4-inch cast-iron stack came up from the basement in the middle of the existing second-floor bathroom,” Avoles said. “This was a surprise to everyone.”