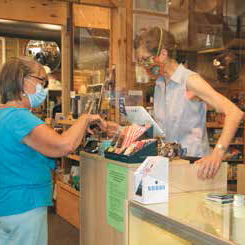 If you’re in the right business, you could be doing well in the new coronavirus economy.

The Little Wine Shoppe in Milton Square has increased sales and Sharrett’s Liquors co-­owner Jim Forsland says business is “back to where it was” because more people are drinking beer and cocktails at home rather than at bars or restaurants.

Frattallone’s Ace Hardware reported earlier they benefited from an uptick in home and yard projects, and Hampden Park Co-op and Tim & Tom’s Speedy Market likely got a boost when a few other grocery stores were destroyed or closed during protests against police violence.

Meanwhile, Source Games & Comics manager Gene Seichter, said, “We’re fortunate enough to be able to sell escapism.” The Rose­ville store had to close its popular game room, which could draw up to 80 people for weekly Dungeons & Dragons sessions. But Seichter said customers are ordering from the new online store and have adapted to wearing masks while they browse the brick and mortar shop.

“Before the shutdown we were having a great, great year,” said Seichter. “We’ve taken a dip but we’re still doing really well.”

As local shops and services adjust to selling during a pandemic, some have adapted successfully while others struggle with changing consumer habits, new safety protocols and an uncertain future.

Stores that sell escapism and essential goods tend to be doing well. ERIK’S Bike Shop in Roseville is repairing and selling bikes to more people seeking low-risk recreation. However, many local retailers aren’t back to normal. “People in the neighborhood have been very supportive,” said Peggy Merrill, who opened boreal on Como Avenue last year with her partner Janet Haugan in the former Bibleot location. “But it’s not like it was before. And we’re trying to figure out how to make it all work.”

boreal reopened in May with acrylic sheets in front of the cash register and hand sanitizer by the door. The clothing that customers try on is steam cleaned before going back on display. The shop offers delivery and curbside pickup. Puzzles are selling, especially challenging ones like a double-sided succulent puzzle. So are the $10.95 fabric masks that Merrill sews. But foot traffic is slow, she says.

Owners of Winding Trail Books, which opened last summer in Milton Square, hope orders from its new online site will keep them afloat until the virus is under control and customers and book clubs return to browse their space in Milton Square. They reopened in July but have seen few shoppers, said co-owner Rick Gahm.

“We might have three or four people stop in a day,” he said. “Are we going to make it? I don’t know. It’s going to be tough to cover rent.” Gahm and his partner didn’t qualify for government loans, since they don’t have employees.

The bookstore had a lackluster response to a GoFundMe appeal. “I miss the people so much,” Gahm said. “I miss the camaraderie. That’s what bookstores are about.”

Around the corner, upscale women’s clothing shop Scarborough Fair is only open by appointment. Owner Katheryn Menaged, who moved into the Carter Avenue space in 2016, is working to expand her online business. She’s selling inventory at half price to bring in cash and pay bills.

“But that’s not a sustainable business model,” Menaged said. She doesn’t see in-person business returning to what it was unless and until there is a vaccine, which could be a long time off.

So, Menaged is reinventing her approach, offering Zoom style sessions and delivering bags of clothes for women to try on at home. Given the drop in demand, she’s also backing away from fancy outfits, like mother-of-the-bride dresses.

“We’ve never been a casual store, so we’ve had to pivot really fast,” she said. Now she’s thinking about what middle aged and older women want to wear as they hang out at home. “We’re anti-being-in-your-pajamas for a week.”

On the other hand, Montgomery is seeing more sleeping bags, comforters, blankets and sweaters for cleaning.

Tough for up close and personal businesses

Businesses that face the biggest changes may be the ones that rely on getting up close and personal. At the start of 2020, Maggie Miley Kelly’s skin care business was in growth mode. She’d taken out a loan to expand Complexions on Carter Skin Care Boutique in Milton Square, built a second room and hired an employee.

When the virus hit, Kelly halted her services. Even after the state allowed personal care businesses to reopen in June, Kelly waited to book clients until she figured out a way to do it more safely. People who get facials can’t wear masks and she often hovers inches away from someone’s mouth.

“I’ve just started to open up,” she said. “I’m wearing a mask and shield and I’m talking more to the clients before their appointments, so I know exactly what I want to focus on and spend less time breathing that shared air space.”

Like many working parents, Kelly lost childcare when her son’s public preschool shut down. So, she’s only seeing clients in the evenings when her husband can care for their son. She knows she’s lucky to able to dramatically cut back. Women Venture, which financed her expansion, paused loan repayments and she has a spouse who works full time.

“It’s all in play,” Kelly said about the personal beauty and self-care industry. “I think there is going to be a lot of reshuffling as people figure out what they’re going to do next.”

Farther south on Raymond Avenue, Salon George has also ramped up slowly. Stylists are wearing masks, cleaning stations between clients and leaving doors open for ventilation. People concerned about possible viral exposure can book the first appointment in the morning and a few have even gotten haircuts in the parking lot, said owner Patty George.

One result of being closed for a few months? Some women who let their hair grow out or grow out gray are opting to keep it that way.

“It’s actually been kind of fun seeing everyone and how they landed,” George said. “It’s gotten clients past a point of no return. More often people are liking their longer hair and quite a few have decided not to color anymore.”

Still, George misses what a lot of people are missing these days—the socializing, the pampering, the little extras.

“I can’t offer coffee and cookies and magazines,” she said. “It’s not like you come in and hang out with a friend and get your hair done. It’s not as warm and fuzzy as we’d like it to be. Right now it’s all about business and getting back on track.”

Maja Beckstrom is a writer/journalist who lives in St. Anthony Park.