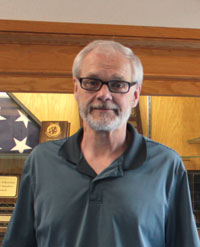 Murray Middle School teacher David Hughes is hanging up his education hat in June after 25 years in St. Paul Public Schools. He has spent the last 14 years teaching seventh- and eighth-grade social studies at Murray.

Hughes was recognized at the Minnesota State History Day competition in May for his work at Murray.

When Hughes decided to get his master’s degree in education after 10 years of working as an insurance adjuster, it was because he wanted to work with kids and use the knowledge he acquired with his bachelor’s degree in social studies. A native of the steel-mill town of Toronto, Ohio, Hughes came to Minnesota to visit a friend who was attending Winona State University in Winona.

“I couldn’t believe there was a place where you could literally breathe,” he said. The air pollution produced by the mills in his hometown took its toll. “They used to say that breathing the air there was equivalent to smoking three packs of cigarettes a day.”

He stayed, attended Winona, and later received his master’s degree in education at River Falls. He did his student teaching at Hazel Park and stayed there for 10 years, spent one year at Highland Junior High and then came to Murray.

What’s he looking forward to in retirement? Not hearing the alarm clock go off at 5 a.m.