Luther Seminary intends to maintain “a beautiful campus” despite its plans to sell off 15.5 acres, including the Breck Woods.

Michael Morrow, Luther vice president of finance and administration, offered that comment at a recent neighborhood forum where he and other school representatives discussed campus plans for a major renovation.

Luther’s lower campus area, including Bockman Hall, at the 2400 block of Como Avenue, was put on the seller’s real estate market in July. “We have gotten a number of proposals and have started to look at them,” Morrow said.

“Our goal is to identify a lead developer late this fall and have an [sales] agreement in early 2019,” he continued. “The closing will take time with due diligence and planning.”

The seminary’s asking price for the 15.5-acre parcel is $11.9 million, Morrow said. “We don’t know what will be developed. Once someone is in the process, they will have to go to the public with their plan.”

“While we don’t need it [Breck Woods], we understand the importance of that space,” he said, adding that Luther Seminary is open to any proposals offered by the community for that land. 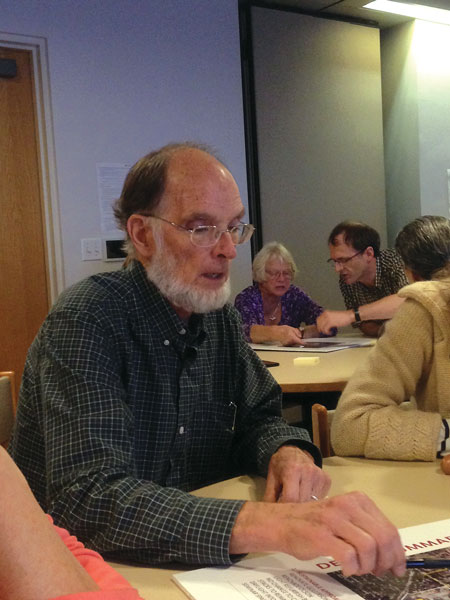 Michael Russelle, a member of the St. Anthony Park Community
Council, was among a large gathering of people attending Luther
Seminary’s recent neighborhood forum to discuss its renovation
plans. Photo by Scott Carlson

Community groups and of residents are lobbying to save Breck Woods, contending it is an irreplaceable natural resource. Breck Woods is home to some endangered species such as the rusty patched bumblebee, and appears to represent some last relatively undisturbed section of the historic Mississippi River gorge, the St. Anthony Park Community Council stated in a letter to the seminary. In fact, the Mississippi Watershed Management emphasized the importance of protecting Breck Woods in the 2006 Bridal Veil Creek Report.

Scores of people are sharing their comments about the significance of Breck Woods on a website called “Save Breck Woods” (https://savebreckwoods.com/ ). And at least one group has been exploring whether they can assemble an offer to buy Breck Woods.

In May, the seminary’s board of directors approved selling the 15.5-acre parcel in line with its “Campus of the Future” plan. The sale includes the campus epicenter, Bockman Hall, as well as Northwestern Hall, Stub Hall dorms, the LDR Apartments, and Breck Woods, the 7 acres of wooded land bordering the Lauderdale Nature Area.

The land sale is all part of reshaping a seminary that no longer houses all of its students throughout the school year.

“We need a different campus,” Morrow told the Bugle last spring. “We have a much different student base. The campus we have was designed for larger enrollment with everyone here taking classes full time. Today we have 500 students. About half are in the distributed-learning program, which means they live all over the country [and] take most of their classes online. We don’t have that many people here.”

“For us, it’s not what we are getting rid of; it’s what we are moving to,” Morrow told the Bugle in May. “We can meet our needs with Olson Campus Center and Gullixson Hall. Bockman would be a good housing place, but we don’t really need all of that.”

Along with downsizing its physical footprint, Luther Seminary needs extensive renovation to some campus buildings and facilities, Morrow said at the neighborhood forum. That includes renovating Bockman Hall, which is on the National Registry of Historic Places, and create space that the seminary can use for short-term student housing.

Luther Seminary has slowly been selling under-used portions of its property for several years. In 2014, the seminary sold five apartment buildings on Eustis Street to Greenway Village. Senior housing developer Ecumen bought 1.6 acres at Luther Place and Como Avenue in 2015 to build Zvago, a 49-unit co-op currently under construction. HealthPartners purchased 4.5 acres of land across from its Como Avenue building in 2016 to build a replacement clinic.