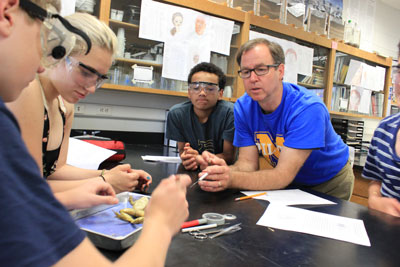 Murray Middle School science teacher Tim Chase helps eighth-grade students as they dissected frogs during one of the last days of the school year. Photo by Kristal Leebrick

Tim Chase wants to leave a legacy. Now just weeks from his 50th birthday, the eighth-grade science teacher at Murray Middle School has spent much of the last half-century laying the foundation for his life’s work.

If external honors and recognition are any measure, Chase has already succeeded. Last year, the Minnesota Association of Environmental Education named him Educator of the Year. The Environmental Inquiry Immersion Course the he started at Wolf Ridge Environmental Learning Center in northern Minnesota has earned a special sustainability award from the City of St. Paul mayor’s office, and just last month Chase was invited to give the keynote speech at the formal dedication of the new Como Woodland Outdoor Classroom at Como Regional Park.

While pleased by the recognition he’s received, Chase says his biggest satisfaction comes from hearing from his former students and knowing he’s made a difference in their lives.

“I have students who go on to do everything from studying volcanoes to becoming writers and astronomers,” he says. “Just keeping in touch and hearing their great stories: That’s my legacy.”

But the awareness is always there that not all the stories turn out happily.

Chase wants to be present at the turning points of his young students’ lives, partly because he knows just how profound the consequences of those pivots can be for their futures. He often tells his students a story of two eighth-graders he knew in his first years of teaching. “Two super-smart, fun-loving young men of color,” he describes them. Both equally equipped for the challenges ahead. “But one kid grew up to be a drug dealer and got shot. The other kid came back years later and told me that he was now in law school. Both had the choices to go either way. I use that story with students who might be heading toward the dark side. I tell them, ‘I need you to be in law school someday.’ ”

Chase teaches early adolescents—kids poised between maturity and childhood, with all their attendant mood shifts and emotional peaks and valleys. He wouldn’t have it any other way.

“I like being silly and goofy with them,” he says. “You can have fun with that and then you can turn around and have complex discussions. I find it incredibly enjoyable to work with those flexible [young] brains.”

A country boy who grew up in rural Wisconsin at a time when “running around in the woods” was considered the ideal extracurricular activity, Chase is always happiest when he can get his students outdoors. Whether it’s introducing city kids to the wilderness experience at Wolf Ridge or simply leading a class down the block to the informal outdoor classroom he has created at College Park, Chase is in his pedagogical element.

At College Park, he’ll direct the kids in “invertebrate study”—aka bugs for those whose school days are long behind them—teaching the students how to collect data as they determine which micro-habitat (the swamp area, the pine grove or under the oak trees) has the most creepy-crawlies.

At the newly designated Como Park Outdoor Classroom, the subject is phenology, the closely observed indications of the change of seasons. Whether it be noting the timing of buds bursting into bloom or marking the annual appearances of migratory birds, Chase’s students collect the micro data of nature that answer the important questions of climate change.

His instruction may center on scientific observations, but for Chase the key to learning is the people involved.

“It all comes down to relationships with other human beings,” is how he describes his educational method. “I’m more successful when I do outreach—home visits, phone calls, meeting on a personal level. I hope the kids know that I think the world of them. I believe in each kid.”

But it’s far from easy.

“To make learning happen is an art form,” Chase says. “To create an environment where all students feel welcome, recognized for who they are and inspired to think and wonder is amazingly hard to do.” He describes teaching as a “career for a workaholic” and confesses that he regularly puts in 10-hour days with a “couple of hours in the evening” tacked on to respond to emails from parents and students.

That’s one reason he’s frustrated by the criticism so often leveled at public schools. “People don’t realize how much patience it takes to work with reluctant learners. The hours of preparation necessary . . . to orchestrate a classroom,” he says. “A doctor sees one patient at a time and solves one problem. I get a kid for one hour a day with 37 other kids and with all the circumstances of life they each bring—and I’m expected to pull off a miracle of learning.”

He thinks of teaching as an art, but “the classroom structure with rooms, bells and schedules is not an artistic environment. I am glad we’re held to high expectations, but the structure of the learning environment will have to change before we get the results we want as a society. I believe that is one reason teachers get a bad rap. We have changed the expected [educational] outcomes, but we haven’t changed the fundamental structure of a classroom.”

And then there’s the issue of money. Chase loves what he does and he would surely work no harder were he paid twice as much, but he doesn’t discount the impact of funding on either the schools themselves or on the teachers who work there. Not only do his class sizes sometime approach 40 students, but he works in a building that dates from 1965 where half the lab stations no longer work.

“Money can solve [these] problems,” he notes.

As for traditionally modest teacher pay, Chase confesses it almost kept him out of the classroom altogether. “I always wanted to be a teacher,” he says, but somewhere during the last couple of years of college, “I got afraid. Teachers don’t make much money.” After graduation, he went for an MBA instead of a teaching credential. Then he suffered through a brief, unhappy career in marketing, before returning to his true vocation.

Others might not be so fortunate. “How many good people are scared away [for financial reasons] when they might have been great classroom teachers?” Chase asks.

Luckily for his students, once Chase took his first teaching job at Murray more than 20 years ago, he never looked back.

“I tell my students that I hope you enjoy what you do in life as much as I enjoy being your teacher.”