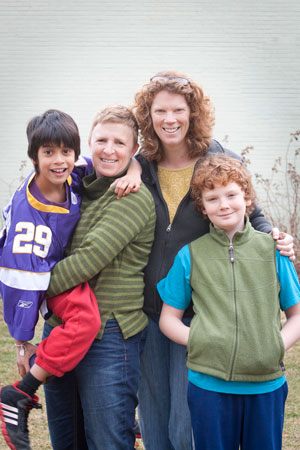 Sara Ford (left) and Kim Klose with their sons, Jeremy and Cullen. Photo by Lori Hamilton

This is the third in a series of occasional articles by Judy Woodward that look at different aspects of the Bugle’s communities as revealed by the findings of the 2010 U. S. Census.

In this area, the dominant color of the last election was orange. More common and more prominent than signs for any candidate—including the presidential contenders—the bright orange lawn signs advising passers-by to Vote No on the Marriage Amendment became the visual signature of the election.

Election results bore out the lack of enthusiasm for the amendment that would have enshrined traditional heterosexual marriage in the Minnesota State Constitution. About 47 percent of Minnesotans statewide voted to approve the amendment, but in St. Paul, Falcon Heights and Lauderdale, more than two-thirds of voters opposed the measure. In Legislative District 64A, the no vote was a remarkable 82 percent, outpolling every politician from Barack Obama down to State Rep. Erin Murphy.

Quite a display for an area that, according to the 2010 Census results, contains no more than 2 or 3 percent of households that define themselves as same-sex partnerships.

No one knows how many gay couples and families have lived in the area in the past, since 2010 was the first year that the U.S. Census included a question that allowed same-sex couples to identify themselves as such. The Census question is probably a case of bureaucracy catching up with reality, since gay couples have lived in the community for many years. Like more than a dozen other communities statewide, both St. Paul and Falcon Heights already maintain domestic partnership registries, which give gay (and straight) couples a symbolic means to declare their relationship publicly.

Local gay families differ on the importance they attach to the defeat of the marriage amendment, but most agree that the no vote represented a milestone in the political life of the area.

“It changes things tremendously,” said Sara Ford, 45, an academic union official who lives with her partner, county planner Kim Klose, 45, and their children in the Como Park neighborhood. “On a grand level, it makes this a better state to live in. I wasn’t aware of how much stress I felt until it was over.”

Klose adds that she worried about the impact the measure might have had on their sons, who attend fourth and fifth grade in St. Paul Public Schools. “If it were to pass it would [have] sent the message that some families were of lesser value,” she said. “We didn’t want our sons to hear that message.”

Both Klose and Ford had campaigned actively against the marriage amendment, but they let their sons choose whether or not to participate in their mothers’ cause. Cullen, who turns 10 this month, responded in his own fashion. During the State Fair, Cullen set up a Vote No pop stand in the front yard to attract passing foot traffic.

Karen Duke and her mother, Joan Duke, took time out from baking banana bread and soothing Karen’s cranky 2-year-old, Luca, to talk about their reactions to the vote. Duke, 45, the principal of the Randolph Heights Elementary School, lives with her partner, Desiree Kempcke, 51, an orthopedic surgeon, as well as Luca and their daughter, Naomi, age 6, in St. Anthony Park. Karen’s mother and stepfather live a few blocks away.

Initially, Karen said, she was angry at the very idea of the measure. “It felt like a referendum on my family. People [thought] they had the right to vote on my family,” she said.

For Karen, who graduated from high school in 1985, “coming out was a non-event,” partly because of the support of her family and the embracing environment of her church and her neighborhood. “We haven’t tried to be on a mission,” she said, “but we’re deliberate about being open. We’ve entered into things with the assumption that we’ll be accepted.”

Joan Duke said that she felt an “emotional boost” from the failure of the marriage amendment. “The majority of people were at least voting against a bad thing,” she explained. “Maybe they’re not sure they’d all endorse full gay marriage, but you can feel the tide turning.”

Gay marriage is, of course, the next logical step. “We definitely would like to get married,” said Karen—for reasons both emotional and practical. “Even our close straight friends don’t understand what it means that we can’t get married,” she adds. “When I had Luca, Desiree had to adopt him. That cost thousands of dollars.” Filing as two single taxpayers rather than jointly as a married couple costs them thousands more each year.

Information manager Heather Lewis, 42, and her partner Mary Doran, 50, a member of the St. Paul Board of Education, have a slightly different view of the importance of gay marriage. The couple lives with their two school-age daughters in Como Park.

“We should have all the same rights as anyone else,” said Lewis, “but getting married wouldn’t alter our commitment [to each other.]”

As a public education official, Doran regrets the money spent on the marriage-amendment campaign. “So much time and money [spent] on an issue that ended up gaining no ground,” Doran said. “As someone [associated with] the public schools, I would happily have taken that money for schools.”

Although Doran hopes that the Legislature will legalize gay marriage during the upcoming session, she said, “I think they should deal with the budget crisis as a first priority, and if there’s time they should pass [gay marriage] at the end of the session.”

State Rep. Alice Hausman plans to press for quicker action. “We should move quickly,” she said. “We ought to just follow through and repeal the Defense of Marriage Act.”

Hausman argues that legalizing gay marriage might not even create much controversy in the state. “In the Legislature,” she notes, “55 Democrats and 21 Republicans were elected in districts that voted to defeat the marriage amendment. That’s a broad cross-section. It’s one of those defining moments in history. It closes the loop of conversation from the campaign.”

Their tactical approaches may vary, but many gay families share a vision for a future of ordinary acceptance. Said Karen Duke, “I hope 50 years from now people will say [about gay marriage], ‘What? Was that ever in question?’ ”