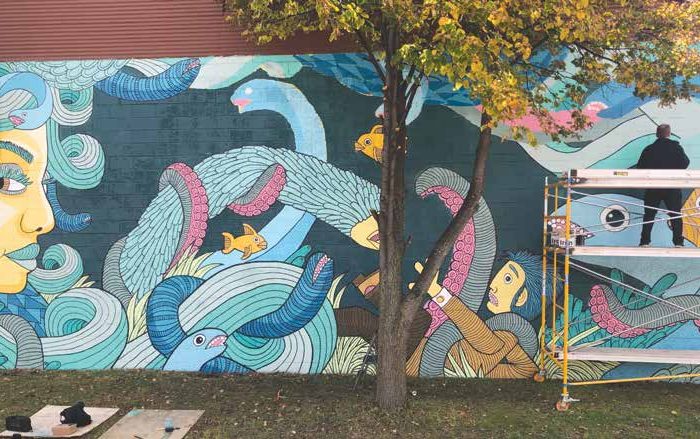 The sea creature is the creation of Chuck U, a Minneapolis artist and illustrator. Your refrigerator may have hosted his art, featured on Indeed brew cans. Chuck U mainly creates smaller scale pen and ink print work, but has recently branched out into larger projects.

Despite the time it took to plan his mural (three weeks) and paint the wall (nine days, “give or take a few days lost to weather”), Chuck U is a fan of the Chroma Zone festival,

“I can’t believe how talented and amazing everyone was,” he said. “This was such a fun project. Can’t wait for next year. Bet this fest is going to just keep getting bigger and better.”

Spot Weld, Inc., is also a fan of Chuck U. While agreeing to host a mural felt risky at first, the company is very pleased with the outcome. Owner Craig Kilbane is proud to display Chuck’s work.

“During the warmer months, we saw a major uptick in traffic on the streets here; families walking with strollers in tow, van loads of people stopping and walking between murals, people walking their dogs, bikers and more,” he said.

Kilbane added, “The murals have added some soul to an other­wise sober industrial business park.”