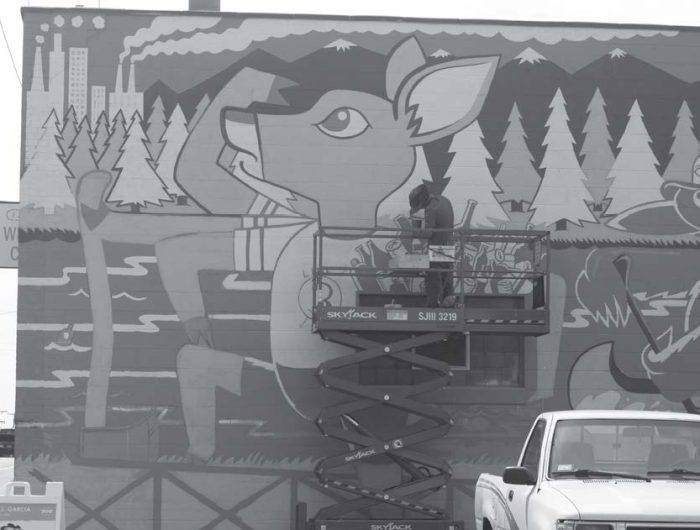 Garcia’s art creation features a loon and, his favorite, a doe, “who stands on a toppled oil rig, holds an ax, and wears a t-shirt with a crossed out ‘line 3’ symbol.”

The mural “Frontier Justice” is located on the E-Z Recycling building, 875 Prior Ave. His inspiration for the mural came from his host business, which has worked for over 30 years “helping to make the world green.” Garcia also found inspiration in the wall itself: a gas meter transformed into the oil rig and two windows became boxes of recyclables.

Garcia was surprised how few people recognized his reference to the proposed pipeline. “I’m very happy to know I’m bringing an awareness to the community, which is why I create murals in the first place: to get messages out into public spaces,” he said.

This year’s festival experienced days of rain, delaying artists and driving organizers to find volunteer painters. “I truly could not have finished this mural in time if it weren’t for all the volunteers,” Garcia said. “As the saying goes, ‘it takes a community’ and this project was a testament to that.”

Originally from New Mexico, Garcia earned his MFA from the Art Institute of Chicago and was a teaching artist at the National Museum of Mexican Art. He and his wife moved to Minnesota this year. “I’m looking forward to ice fishing,” he said.