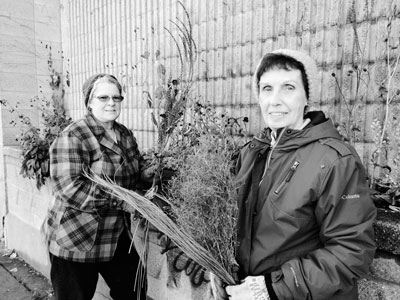 Mary Maguire Lerman (left) and Carol Hagerty work on the St. Anthony Park Garden Club’s winter garden in the flower boxes in front of the Como Avenue post office. Garden club members save their dried plant materials for the garden, which Lerman says provides something pleasant to look at “for two-legged mammals and the birds will enjoy having a seed source for their winter snacks.” Lerman recently received the Minnesota State Historical Society’s Life Award. (Park Bugle photo by Kristal Leebrick)

Lerman worked for the Minneapolis Park and Recreation Department for 32 years, coordinating gardening efforts throughout the city. She also served on the horticultural society’s board of directors for six years, including as board chair in 2013. Lerman has represented MSHS all over the state, attending garden club meetings and horticulture days, speaking and encouraging others to join MSHS.

She has helped maintain the MSHS State Fair garden along with other volunteers from the St. Anthony Park Garden Club. Most recently, her volunteer focus has been with the Garden-in-a-Box program and the St. Paul Midway YMCA Teaching Giving Garden, where MSHS installed 48 garden boxes. Over the summer, Lerman worked with 130 students, teaching them about gardening and nutrition.