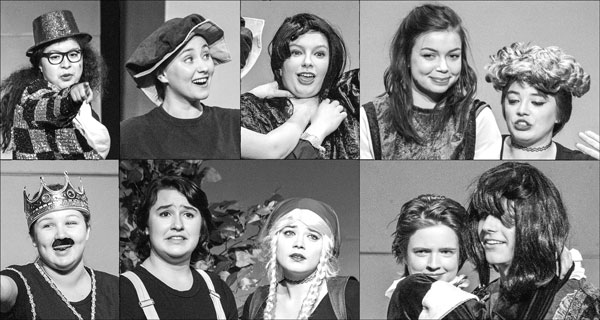 May news from Como high school

Spring play was lively and humorous

The many faces at the Como spring play. Photo by Mike Krivit, mikekrivit.com

French students recently participated in the annual A Vous la Parole French-speaking contest held at the University of Minnesota. Sponsored annually by the Minnesota Chapter of the American Association of Teachers of French, with support from the U of M’s French Department, the contest recognizes excellence in French speaking skills. This year’s contest drew more than 1,200 student entries.

U.S. History students spent an afternoon in an Underground Railroad simulation with leaders from the VocalEssence WITNESS program. The “Exploring Freedom” workshop uses the sacrifice and lifework of Harriet Tubman to connect students with U.S. history and racial discrimination. The workshop includes African drumming, storytelling, group challenges and break-out sessions.

More than 500 Advanced Placement (AP) tests were taken at Como in subjects ranging from chemistry to economics and calculus to world languages. The AP exams are a culminating assessment of the knowledge gained from the rigorous college-level courses. AP courses are instructed by Como teachers and regulated by the AP College Board.

Senior Marie Wulff represented Como at the Athena Awards Banquet last month as a top student-athlete in the St. Paul Area. Wulff was a captain in soccer, a captain in robotics and lettered in track for two seasons. Her resume of academic accomplishments and volunteer service are extensive. Highlights include status as an AP Scholar, A Honor Roll with Distinction, leadership in the National Honor Society, tutoring, mentoring, peer mediation and international service trips. Wulff’s family, coaches and Como administration attended the luncheon with her at the Envision Event Center in Oakdale.

The Como Senior High School class of 2017 will graduate in a ceremony Tuesday, June 6, at Roy Wilkins Auditorium at RiverCentre in downtown St. Paul. The annual senior all-night party, sponsored by the Como Booster Club, will take place at school after the ceremony to provide a safe, fun environment to celebrate. Dancing, arcade games, henna artists, basketball, swimming, food, prizes and more are on the agenda. Parents and community members are invited to help before, during or after the party, and donations are welcome at any time. Use the VolunteerSpot link to help: http://signup.com/go.KY29UN.