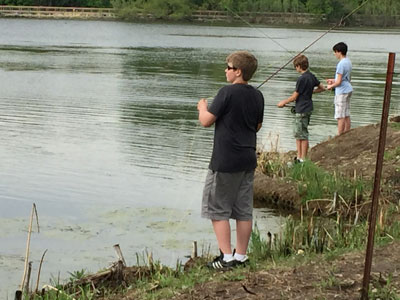 May news from Murray Middle School

On April 22, Murray science teacher Tim Chase and 10 current and former Murray students accepted the Sustainable St. Paul Award for their work as part of the eighth-grade Environmental Inquiry Immersion Class created by Chase. Each year, Mayor Chris Coleman and the St. Paul City Council recognize organizations that work to create a more sustainable city. The awards go to “individuals, businesses and organizations that work to protect and restore the environment in St. Paul.”

Murray Middle School was transformed into a place where students learned about men made of stinky cheese, kids who act like squids, math curses, science verses, time warping and how those characters were often inspired by the antics of author Jon Scieszka and his five brothers. The world-renowned author of The Stinky Cheese Man and Other Stupid Fairy Tails visited Murray Middle School on April 22. This was made possible through a partnership between Murray and the University of Minnesota’s Read and Meet Program.

Scieszka spent the day learning about Murray from the school’s student ambassadors—who gave a tour, presented and explained the grade-level projects that were inspired by Scieszka books—and advising students about how to write books. He presented his story to the entire student body and shared tales about his family, inspirations for his books and what a career as a writer means.

Murray has been transformed into a Scieszka-inspired literacy gallery where verse, fables and multiple perspective fairy tales line the walls. Additionally, the U of M selected 30 projects to display in the Anderson Library that exemplified the work done by Murray students.

“You have amazing students who made me feel comfortable and welcome,” Scieszka said, “and I hope they learned something from me because I certainly learned from them.”

Dr. Mark Seeley presented data from the second edition of his book Minnesota Weather Almanac at Murray on May 6. Students asked great questions such as “What were the wildest extremes Minnesota has experienced in one year?” and “What can we do to stop climate change?”

The students who asked the best questions received a signed copy of his book.

Science teacher Nick Altringer has been teaching students how to tie flies and how to cast a fly rod in his after-school fly fishing class. He and some of his students went out to Keller Lake after school on May 6 to try their skills. Every student caught a fish, and Altringer said he would bring a ruler on the next trip to see who gets the largest and the smallest fish award.

Science teacher Nick Altringer has been teaching Murray students how to tie flies and cast.