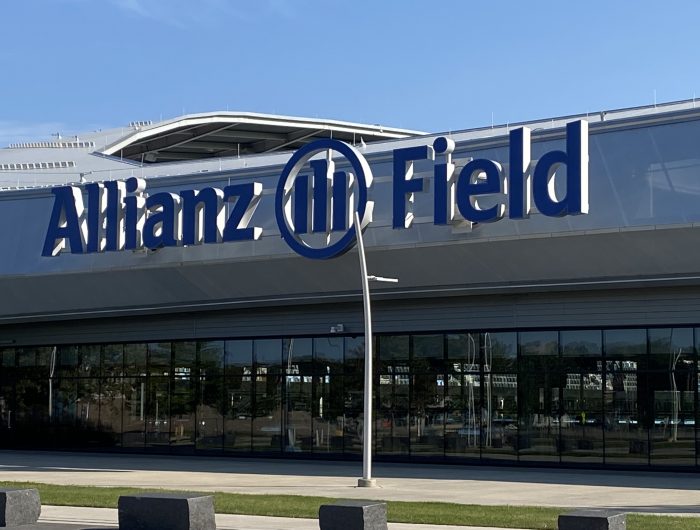 Allianz Field, the home stadium of the Minnesota United Football Club in the Midway neighborhood of St. Paul, opened in 2019. It has hosted dozens of Major League Soccer matches, plus U.S. National Team matches and international friendlies.

“It’s a dream,” Como boys co-coach Sunday Htoo said. “For all these players who support Minnesota United, and see the stadium in our home city—to get inside and play on the best field—is really exciting.”

Most of the players from Como and Humboldt have seen United Football Club games on television. A few have been inside to see a match. But for most of the participants in the Mayor’s Cup girls and boys doubleheader, it will be their first time in the stadium. To be playing for their school teams on the state’s premier pitch is indeed a dream.

“It will be a whole new experience,” Como junior Gay Ler Htoo said. “I heard it’s so nice and that it’s huge.”

“It will be so good to represent our school there,” Como senior Ethan Lee said.

For those wondering why Como and Humboldt are the first high school teams to play in the professional stadium, it’s the history of the Mayor’s Cup matches that creates the bridge.

As the Como boys head coach in 2016, Jonah Fields (now co-coach) implemented an idea that he coordinated with then Humboldt boys head coach Matt Osborne (now Humboldt’s athletic director.) Growing up together and playing soccer in St. Paul, Fields and Osborne shared an appreciation for the passionate rivalry between the schools they then coached as adults.

Fields advanced the initiative by creating trophies (one cup for the boys’ game and one cup for the girls’ game) with dedications inscribed to then Mayor Chris Coleman, who secured the partnership and site for the United Football Club to build in St. Paul.

When the Como-Humboldt boys and girls doubleheader date was set on the 2016 schedule, Fields promoted the game as the “Mayor’s Cup” and then reached out to the Mayor’s Office with an invitation for Coleman to present the trophies to the winning teams. A new tradition was born.

Similar to college football trophy games during the regular season (like Paul Bunyan’s Axe between the University of Minnesota and the University of Wisconsin), there’s pride and joy in holding the Mayor’s Cup after a victory, and keeping the cup at your school for the next year.

On the girls’ side, Como has kept the cup since the beginning. But the timing of this year’s match at Allianz is excellent because Humboldt and Como appear to be evenly matched, which should produce a competitive contest.

On the boys’ side, the cup has spent time at both schools, but is currently on display at Humboldt. The Hawks, now coached by John Pucci, are certainly working to possess it for another year.

“The players always take this game as seriously as a section playoff game. Do or die. They want that cup.” Osborne said. “The extra dignitaries that show up mean a lot to the players as well.”

For the United Football Club to partner with the schools and elevate the venue to Allianz Field is significant for many reasons.

“It shows their commitment to local city soccer and giving back to the community,” Osborne said. “Not all the Humboldt and Como players can afford or navi­gate club soccer. For them to get this ­opportunity—it’s amazing just thinking about what the field will look like with our players on it.”

United Football Club Public Relations Director Eric Durkee, a Como graduate from the class of 2004, said the club’s values are based on growing the sport and uniting the community around the game.

“From the outset of building and designing Allianz Field we wanted to create a space for soccer to succeed at all levels,” Durkee said. “We felt this was a fun way to provide a moment for high school soccer players to create memories that will hopefully last a lifetime.”

Fields is confident the experience will be unforgettable for all those involved.

“It will be so much fun to see the student athletes have a really special experience and have their families and school communities there to play in a world class stadium,” Fields said. “It’s that excitement and recognition for our girls and boys players from the neighborhoods of St. Paul to have this amazing privilege that they’ll remember for the rest of their lives.”

The community is encouraged to attend on Friday, Oct. 8! Admission is free on a first come, first served basis with an attendance cap of 1,500. The girls kick-off at 5:30, the boys at 7:30, with both cup ceremonies immediately following the conclusion of the boys’ match.