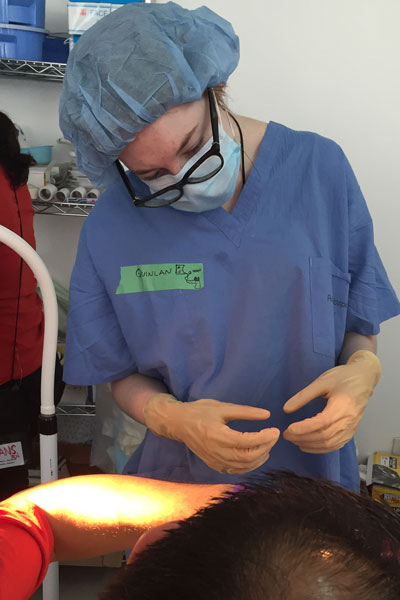 Quinlan Fletcher had no intention of following in her father’s footsteps. While she always admired the work that Dr. James Fletcher has dedicated himself to as a plastic surgeon specializing in hands, she thought surgery was, well, “gross.”

“I was actually always disgusted by the idea of surgery,” she laughed. “Blood made me cringe; I had no interest in doing anything like that.”

For years, Quinlan, who is set to graduate from Visitation School in Mendota Heights in May, heard about her father’s medical missions to the Philippines. The missions are led by Dr. Bernard Quebral through the Philippine Minnesotan Medical Association (PMMA).

“Dr. Quebral is a friend of my dad’s and encouraged him to join. My dad is an amazing doctor, and has been extremely passionate about this mission for as long as I can remember,” she said. “He’s been investing in these missions and going every two years since I was in grade school.”

This winter, Fletcher joined her father on his mission travels for the first time. “We always knew I would go some day,” she said. “My dad wanted to wait until I was old enough to deal with the work, the poverty and the tough conditions. I also think he wanted to wait until I was mature enough to really understand the service I was doing. Now that I’m leaving for college, it seems like a time of change. I thought some perspective would be good before I leave to go off into the big, bad world,” she smiled.

The trip took the St. Anthony Park residents, along with about 100 other Minnesota volunteers, to the small town Mariveles. The town sits in an extremely impoverished area of the island of Luzon, the largest and most populous island in the Philippines. The island is also home to the country’s capital city, Manila, but the difference between the two cities could not be more stark. In tiny Mariveles, the Mariveles District Hospital is being built, but it is only halfway constructed. The next closest hospital is in Manila, which is can be a six-hour trip, depending on availability of transportation. The population has exploded in Mariveles, doubling in size in the past four years to more than 5,000 people. Poverty dominates the landscape.

“There are a lot of people living outside, or in shipping containers in fields,” Quinlan explained. “Or they’ll create small shanties constructed of wood or metal.”

A vast majority of the population has never had a medical checkup, much less seen the inside of an operating room. “Many have never even brushed their teeth,” she said. “I worked in dental for two days, and I saw children who had no front teeth. They had rotted out like a heroin addict.”

The group set up camp in the half-erected hospital, under sometimes grueling conditions. “It was hot. You couldn’t drink the water,” Quinlan explained. “The basement was missing walls; there were wires everywhere. There were a lot of stray animals. One of my jobs was to corral one of the resident cats out of the building without touching it since it could be rabid.”

But the rough conditions didn’t bother the high school senior. “I was so happy to be there and the people were so grateful that we were there. We served so many people, it was just thousands of operations.”

People came from far and wide, sometimes traveling for hours in hopes of receiving the free medical care.

For the doctors and support staff, a typical day began with a 20-minute bus ride to the hospital, often at 6 a.m. Quinlan would start her day by observing operations. Her father performed many tubal ligations, a much-needed procedure due to lack of birth control and the ensuing population burden. Since Quinlan does not speak the local dialect, Tagala, she sometimes relied on the young Filipino nurses-in-training around her.

“They were around my age, very kind, eager to learn too,” she said. In the afternoon, Quinlan would head to minor O.R., where the teams removed smaller tumors or cysts.

“We didn’t have the resources to put people under in minor O.R. so these folks were awake with just local anesthetic,” she explained. “The patients were such troopers; they are just so grateful. In some operations they were under, but there were several operations where you would think there is no way they should be awake right now but they were. They were just calm and fantastic.”

The PMMA missions run every two years, focusing on a different location each time.

“You don’t get to follow up with patients. You send them off with medication and hope for the best,” Quinlan said. “We go and we leave all of our supplies and hope that things will pick up from there. It was hard to accept that once we leave, that is it for them. They will probably not have access to medical care for the foreseeable future.”

The experience was life-changing for Quinlan, changing her trajectory in a way she never imagined. This fall, she will attend Florida’s Eckerd College, a small, liberal arts school on the Gulf Coast.

“The plan had been for me to be a marine biologist, but the medical mission really changed my perspective. I think I am now going into pre-med,” she said with a wide, hopeful smile. “It was such a powerful experience. I got to see my dad operate, and it wasn’t gross at all; it was just fascinating. It was such a necessary thing for so many people. We were able to do operations that changed people’s lives. It wasn’t as scary as I thought.

“I can’t imagine not feeling a sense of global responsibility,” she said. “Someday I want to help more people like this. In everything I do, I am just getting ready to do my part.”

You can find out more about PMMA on its Facebook page, www.facebook.com/pmma.mn.

Alex Lodner writes about community news from her home in Como Park.