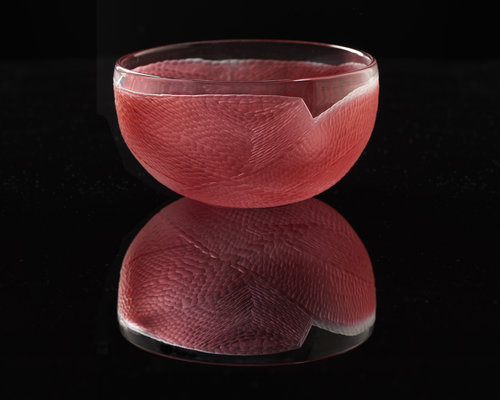 The 49th Annual St. Anthony Park Arts Festival will be held Saturday, June 2, 10 a.m. to 5 p.m., in the St. Paul neighborhood of St. Anthony Park. The festival is based around the St. Anthony Park Library, 2245 Como Ave., and will host more than 70 artists, as well as kids’ art activities, food, music and more.

This year, the 49th annual St. Anthony Park Arts Festival is featuring three artists who make art, all of which is meant to be used daily. The arts festival, Read more to find out what you can expect from the talented three.

Peter Jadoonath has been an artist all his life, but he did not come to pottery until he was in college at Bemidji State University in northern Minnesota. Originally at school for a degree in graphic design with a specialty in animation, life had other plans for him. In his words, he “stumbled onto clay and pottery” and excelled under the particularly enthusiastic Prof. Butch Holden. 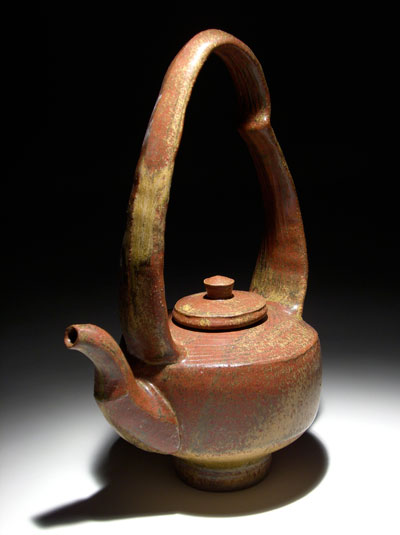 Eighteen years later, Jadoonath is still taken with pottery; his passion and his attention to detail is evident in the quality craftsmanship of his stoneware.

Although some elements of Jadoonath’s pots are familiar within the Midwestern tradition — the curving, open shape and the natural, earthy colors — the graphic, intricate and sometimes-frenetic surfaces of his pots are what makes his work so striking. Jadoonath uses “exceptionally gritty clay” for the “great scraggly marks” that are left when he’s carving, he says.

As drawing has long been Jadoonath’s method of interpretation of his experiences, it is no surprise that he has begun carving his pots to reflect the myriad of inspiration he finds in the everyday. By carving once the pots are formed, “cheese hard” but not yet fired, each piece of utilitarian stoneware is so layered and texturized the conventional urn or teapot becomes new again. Among his work you will find the “hairstyles, manhole covers and textiles” that energize his creative process. Jadoonath chooses his glazes carefully, making sure each one will grip every slice and curve he has carefully manufactured within the clay.

Reflecting his personal style, the “strong pottery tradition . . . laid down by generations” of Minnesota potters and their Japanese pottery influence, are his teapots. The teapot was, and for many still, remains an item central in the kitchen, used everyday for cooking, brewing and cleaning. We recognize a rounded belly, a handle and a spout, but Jadoonath’s exaggerated, elongated handles are a fresh interpretation to what we know as “the teapot.” Grown accustomed to smooth sides, Jadoonath instead delivers something much more dynamic: a detailed, handcarved surface that reveals a true dedication to texture.

“Ultimately I want my pots to be sturdy and dependable,” Jadanooth says as he explains what hand the region had in his work. “I guess that sounds Midwest.” Like most potters, he walks a fine line “making . . . dishes, while trying to honor a tradition, expand an art form and express some ideas,” and after working 18 years within a medium with strong traditional ties, he keeps it interesting. While “functionality is the whole point — at times I make choices that compromise the physical function — in the sense of ergonomics,” he says. His pieces reflect these small and brilliant experiments with Midwestern potter rituals.

Moving forward, Jadanooth wants to continue the work of combining his first love, drawing, with his pottery. It has required a certain amount of “fearlessness” to make pottery work with the added vulnerability of personal imagery, but he says he’s “really enjoying the process.”

Find pots born out of Minnesota tradition and Jadanooth’s personal expression in Booth 50.

When the 9-year-old Jim Sannerud saw a wooden bubblegum machine in a store, he knew it was exactly what his rural Anoka home was missing. After that came tree forts and go-carts made from leftovers around his family’s farm, high school woodshop classes and work as a furniture maker. Now, Sannerud has found woodturning and makes and designs furniture. 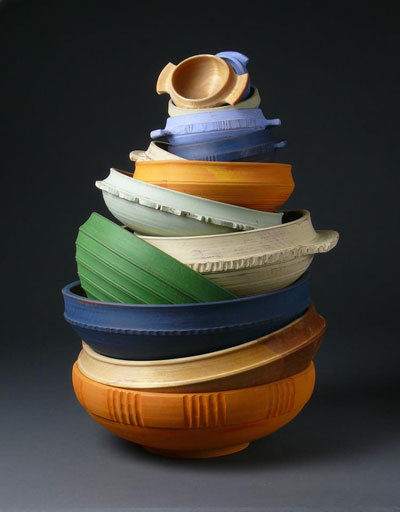 After working in cabinetry shops, Sannerud discovered woodturning on the lathe, and the possibilities with wood became “limitless” in terms of “creative expression,” he says. For some time, he focused on making turned bowls after being inspired by Scandinavian ale bowls, an homage to his Norwegian immigrant grandparents. These bowls are vibrant in color but also functional, using pine and birch, wood closest to traditional Scandinavian material, as well as “natural oils as finishes, so people don’t have to worry about ingesting chemicals,” he says.

Sannerud’s methods are both conservationist and personal. Just as he draws inspiration from his heritage, he respects the wood he’s using. Taking a tree he harvested himself, he works through “green turning . . . working with the wood while it’s still sopping wet . . . the drying process happens after I’ve completed the object.” The “soft and aromatic” green wood feels “much nicer” to work with than the dry, and the method continually pulls him to the lathe.

More recently, Sannerud has been getting back to his cabinetry roots. One chair he encountered at a carving master’s house changed his point of view.

“It was well over 150 years old, and it had never been fixed or repaired or glued,” he says. Inspired by the act of building things to last, he wanted to “get back into this early dream of making” furniture to pass on through the generations, he says.

He visited a Wisconsin chairmaker who specializes in Windsor chairs, the spindly, slightly rounded back, wooden chair Sannerud holds as a timeless model. When he walked into the studio and realized there were no large tools or jigs, and that he could “work by hand and eye, [I] just fell in love,” he says.

Chairmaking became this “Zen making” for him through using a “sight line” to hand carve each piece. Using your body and your tool against the sight line, if you correctly keep your positioning in mind, “it’s just impossible to be off,” he says. “I can’t be off if I’m paying attention to my body. How cool is that?”

After lots of practice, Sannerud has learned how to use his “designer brain” and “maker brain” in union. Now, he designs chairs that are both beautiful to look at and comfortable to sit in. Sannerud’s chairs are made with 400-year-old “time-tested joinery,” descended from the Windsor chair but with Sannerud’s unique voice. His tables match this idea, and his work overall reflects his Scandinavian inspiration in that it is elegant, understated and built to last forever.

Recently, Sannerud moved to Grand Marais, where he works at the North House Folk School. He moved for the native birch and pine in the area. Much of what Sannerud does is for the trees, and he is a woodworker in every sense of the word. He goes into the woods himself, “working with landowners and swayers to source” local materials. He uses as much of each hand-selected tree as possible, sharing what he can’t use with other artists and using the off-cuts for fuel.

Find Sannerud’s work in booth 33 at the Arts Festival and see his vibrant bowls and beautiful furniture.

It took Steve Claypatch decades to find glass blowing. Growing up, he wasn’t exposed to creativity or the arts, and eventually he became a lobbyist for an electrician’s union. Though the work was fulfilling, after 25 years it became the “best job he ever quit.”

During a weekend glass-blowing class at Foci – Minnesota Center for the Glass Arts in northeast Minneapolis, Claypatch was “exposed to creativity and totally fell in love with it.” The expressive nature and the logic of glass blowing kept him at it, and he has been blowing for the 13 years since.

On a recent visit to his work space adjacent to Foci, Claypatch and his creative partner John Reichel worked on several pieces. While to Claypatch it is all “logic: add heat and pressure and it will go where it’s supposed to go,” to the layman it is magical to watch a lump of glass become something ornate in so blowers juggled 4 ½-foot-long poles with impossibly hot pieces of malleable glass on the ends. Keeping the poles and the glass upon it spinning constantly, the two moved from the ovens to their bench lathes swiftly but carefully. 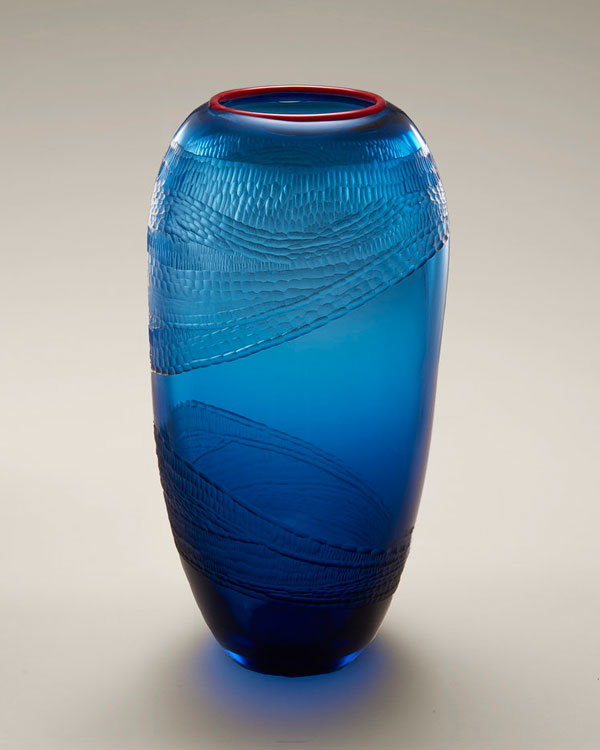 By heating up specific parts of the vessel, they used their breath to manipulate the shape. While one spun the glass-blowing pole and used shears, a file or cradled the glass with a thick layer of wet newspaper, the other blew into the pole. Although Claypatch and Reichel are skilled enough to work on their own, blowing together is easier, especially when making the transfer. At that point, they put a hot, solid pole on the fully shaped bottom and “break” off the top of the piece from the blowing pole. Then, as they continue to work with the piece, they shape the top and eventually separate the entire piece by placing drops of water on its edge and lightly tapping the pole.

This is how the world blows large glass pieces. What makes Claypatch’s glass unique is the work he feels “honored to do”: cold carving.

When Claypatch is carving, he works in millimeters. Using a German engraving lathe to carve his finished glass pieces, he moves the turning bit against the piece, moving the bit incrementally and repeatedly with the same pressure. This method, an Italian practice called Battuto, takes hours, and some of his pieces take months of this painstaking work to finish.

Claypatch’s carved glass is incredibly unique. He credits this to the fact that “nobody in their right mind would take the time” to do what he does. Perhaps Claypatch is right. Not many people would spend weeks or months carving one piece of glass 1 millimeter at a time. To him, the work is exceptionally Zen.

“You have to concentrate so much that there’s no room for any other thought in your head,” he says. This meditation creates vessels that become more dynamic in their tactility and refraction of light. There is an immense joy one gets simply from picking up a piece, twisting it in the light, feeling the surface. This joy is gifted to each piece from the love Claypatch has for creating glass work. With every shift of light we feel the enthusiasm the artist has held for 13 years, the “same excitement each and every time [he] blows a piece out,” he says.

Advice from one of the happiest artists around? Don’t wait. It shouldn’t take 40 years for you to “realize people can spend their life actually enjoying it,” he says.

Find Claypatch’s glass at Booth 70 at the arts festival.

Evann Zuckerman is a poet living with her dog in St. Paul. Look out for her upcoming podcast “NonConformen” about forgotten figures in History.