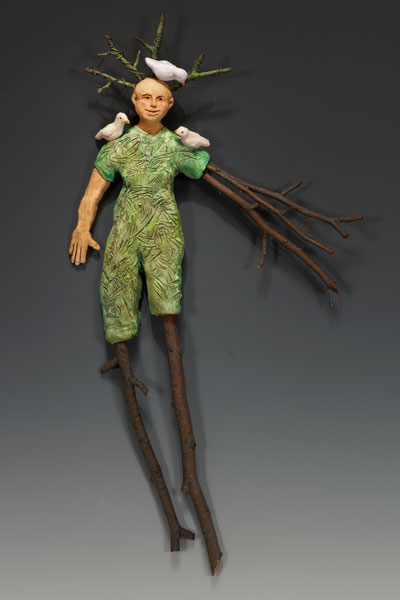 Brenna Busse’s mixed media figures aren’t your typical dolls. They are born of, shaped by and ultimately come to represent the essence and complexities of the human condition, of which we are all a part.

Cultures across the world and throughout history have used the figure to replicate themselves, while probing the depth of timeless questions about identity, transformation and our relation to the mystic.

Working largely with found objects, Busse’s dolls often provoke symbolism that just as easily challenges conceptions as delight the senses. In the same way that twigs and sticks for arms can denote an indelible connection between the human and natural world, scraps of rust plucked from the ground come to represent the riches of aging when incorporated into the body of a figure.

“Metaphorically, as we age, we look at our wisdom and we look at these gems that we’ve learned over time that we could never learn any other way,” Busse says of one figure in particular that features scraps of rust. Like the personal qualities that only come with age and experience, so do scraps of metal come to shine with a patina and rust imparted only by time.

“It’s an incredible dance of terror and joy,” Busse says of her process. In crafting the hands, feet and face of a doll from clay, she must actively imagine what each figure will come to be and represent. Oftentimes the only way to achieve her vision is to let her materials and found objects dictate the design.

There is a persistent character manifested in the thousands of dolls Busse has produced over nearly 30 years. Every face seems to share a recognizable serenity grounded in some spiritual wisdom or understanding.

Just as each human life starts as female in utero, only developing the requisite Y chromosome to become male weeks after fertilization, each of Busse’s dolls begin as female, she explains.

A passionate feminist since the 1980s, Busse says she used to be “pretty rabid” about the gender of her dolls but has since mellowed, coming to understand gender as more of a continuum, while taking a deep interest in what those who encounter her work actually see.

Whether male or female, all her dolls contain imperfect elements that show the human hand in her work—whether it be a frayed thread or slightly distorted proportions.

“Imperfection is essential,” she says. “It’s back to the human condition. We are imperfect and I think the more we understand our imperfections, the kinder we’ll be to ourselves and each other.”

Reminiscent of the icy forms created during the transitional phases of the seasons when waters turn to ice and back again into liquid form, Michael Tonder’s glass sculptures freeze a fleeting elemental transformation in perpetuity.

Influenced by his experience as a forester and park manager, along with his regular excursions into the Boundary Waters, Tonder’s work leaves a peaceful, contemplative impression. He employs internal lines and altered surfaces that reflect, refract and diffuse light to create tension and pique curiosity, while bringing a comforting balance to his work.

It might be this effect that has made his work popular with hospitals and health care facilities, which have accounted for a number of larger commissioned projects of late, he said.

The spark that started Tonder’s career came while working as a forester near Little Falls, Minn. During the early spring, as he crossed the Mississippi River, he noticed that a long stretch of shallows had caused the ice to pile up as it broke.

“As far as you could see up river, all the ice was jamming and sticking up in the air,” he said. “That was a real inspirational view for me. I hadn’t even thought of working with glass at the time. It was just stunning.”

Like his wife, jewelry maker Jody Freij-Tonder, he uses exclusively reclaimed and recycled glass. Instead of small scraps and shards, though, Tonder needs large sheets of plate glass like those used in office building windows or display shelving to create his substantial pieces.

Working with plate glass requires him to use the same sheet for each project, as different glass reacts differently in the kiln and can lead to unpredictable outcomes when he removes it from the kiln. “We say it’s like Christmas every time you open the kiln, but sometimes it’s Halloween,” he said.

Most plate glass like that Tonder uses in his work is not recyclable. He works with local businesses to reclaim windows and has worked it out so development companies can receive LEED certification credits by donating their old glass rather than discarding it.

“We know that we’re not really changing the waste stream very much, but we try to point out to people that there are uses for a lot of material that are getting thrown away,” he said. “It points out the potential for reuse.”

The handcrafted glass jewelry of Jody Freij-Tonder is born of her dual passions for creating colorful, wearable glass art and an unwavering environmental mindfulness that fires both her work and life.

Working entirely with recycled and reclaimed glass, she achieves a wide aesthetic range that uses an array of techniques, including stained glass, iridized, frit, confetti and etched.

Working from her home studio on the North Shore with husband and fellow glass artist, Mike Tonder, Freij-Tonder’s materials primarily come from recycling centers—with which the couple has developed a close relationship—as well as scraps from other stained glass artists in the area. She says that sifting through boxes of glass scraps is one of the most enjoyable parts of her process.

Working with glass in the ways she does provides unique challenges, but is ultimately what allows her to achieve the elegantly playful shapes, colors and textures that define her work. Every piece of glass reacts differently in the kiln and frequently yields surprising—and sometimes frustrating—results, she says.

“The glass itself is not designed for kiln firing, so over the year’s I’ve ended up with surprises when I open the kiln and it has not done what I expected,” she said.

Not one to waste a single scrap, Freij-Tonder also collects all the leftover shards and pieces from her work, tumbles them in a rock tumbler, then fills recycled mason jars partway full and affixes a solar powered LED light, creating unique and enchanting dock or patio lanterns.

The recent craft beer boom has also been a boon for Freij-Tonder, who produces signature “Beerings,” using empty beer bottles collected from the local recycling center. She hand-cuts earrings and pendants from the bottles and necks to create different shapes in brown, green, blue and clear colors.

She has been making “beerings” since the 1990s, but the hoard of craft breweries popping up in Duluth and across the state are jumping at the chance to carry branded glass jewelry, opening up a whole new market.