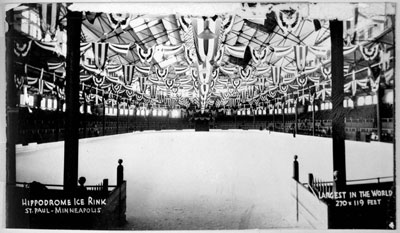 Meet the man who put the ice in the Warner Coliseum

Like many people, Dick Holmsten was sorry to hear that this will be the last season for the ice rink at the Lee & Rose Warner Coliseum on the Minnesota State Fairgrounds. But Holmsten’s connection with the facility is a little different than the hockey players and other skaters who will be looking for an alternative next winter.

The rink was one of 250 that his St. Paul-based Holmsten Ice Rinks Inc. built between the early 1960s and the early 1990s, from Australia to Saudi Arabia, from Alaska to Mexico. Sixty of them were in Minnesota alone.

“During our heyday, we were the top company of our kind in the United States,” said Holmsten, a lifelong area resident now living in the St. Anthony Park Home.

In its day, the Hippodrome ice sheet was considered the largest in the world. (Minnesota Historical Society)

State fair officials are happy that their Holmsten equipment lasted 40 years. However, now they say the 52,000 feet of piping that circulates refrigerant under the floor of the Coliseum rink has deteriorated beyond repair, and not enough people use the rink to warrant replacing it.

The news prompted Holmsten to share a few memories with the Park Bugle, some dating back to the original Hippodrome, the building that preceded the Coliseum on the same site.

“The Hippodrome had a four- or five-piece band playing in the 1930s and my parents sometimes would get a babysitter and go over in the evening to skate,” said Holmsten, who grew up in the Como Park neighborhood just east of the fairgrounds.

“On a Saturday, my mother would give me a dime and a bag lunch and I’d spend the whole day skating there,” he recalled. Holmsten was in the eighth grade when he met Florence, his future wife, that way and they’ve been married now for 64 years.

In its day, the Hippodrome ice sheet was considered the largest in the world. (Minnesota Historical Society)

Built in 1906, the Hippodrome had natural ice, Holmsten explained. Its large windows were kept open and roof vents exhausted heat from the building. During the rest of the year, it was home to horse shows and livestock judging.

The building was converted to a facility for making propellers during World War II and torn down in 1942 because it had become structurally unsound.

A new Hippodrome opened in 1951 and became known for its livestock shows over the next 20 years. As part of an effort to broaden the use of the building, renamed the Coliseum in 1975, fair officials decided to add an indoor rink. It turned out the company they chose for the job was headquartered just up Como Avenue.

Following his military service, Holmsten had joined his father and uncles in their commercial refrigeration business. Starting with South St. Paul’s Wakota Arena in the early 1960s, the company concentrated more and more on the construction of ice rinks. Its patented Rinkmaster system, developed by Holmsten, was simpler and much more economical to operate than the competition.

Holmsten said the trickiest part of the Coliseum job was installing the 14-ton ice-making unit. This was done by cutting a hole in the floor on the east end of the building, lowering the machine and sliding it into a storeroom below.

The rink was a great success in the 1980s and ’90s, serving as home ice for several high schools, Hamline University and the University of St. Thomas and the semi-pro St. Paul Saints. It was also popular with figure skaters and recreational users.

But all good things must come to an end, it’s said, and regrettably so too will indoor skating at the fairgrounds.

Como Park writer Roger Bergerson is a regular contributor to the Park Bugle.