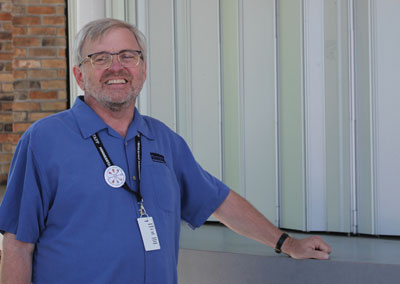 Dennis Larson, the guy in charge of food vendors at the Minnesota State Fair for more than two decades, will retire this year. Photo by Kristal Leebrick

There is so much to love about the Great Minnesota Get-Together, from just hatched chicks to hair-raising rides. But let’s face it, we are here for the food. Be it deep fried, on a stick or fresh out of the oven, we count the days until those pesky dietary rules can be put on hold for 12 calorie-filled days.

Kids in one hand and Blue Ribbon Bargain Books in the other, the crowds snake through the avenues filled with the smells and sounds of frying oil and sugar. It’s all right there for the taking: French fries, pickles, craft beers, cotton candy in a champagne flute. But have you ever stopped mid-bite and wondered, who is in charge here? Is there a method to this tasty madness?

In fact, there is, and the conductor behind it all is Dennis Larson, license administration manager for the Minnesota State Fair. That title is really just an official way of saying Larson is in control of what is available to eat and drink at the fair. At least until the end of this year’s fair, when Larson will retire after 23 years at the fair.

Larson started his tenure at the fair as midway assistant for Jim Sinclair, the fair’s deputy general manager, and worked his way into the financial side of things. “I had always been in sales,” Larson explains. “This was before food at the fair became the beast that it is now. Food was really all about percentages so numbers and food came together as a labor of love, and I kind of became the food guy.”

Larson is clearly comfortable in his role and is at ease talking about the ins and outs of the food and beverage “monster.” He leans back in his chair, surrounded by piles of souvenir cups and a massive collection of State Fair paraphernalia. Pint-sized Fairborne and Fairchild statues peek out from behind files and history books. Pins from fairs long ago hang from lanyards or cling to felted cube walls. This is a fair nerd’s dream. And in the center of it all, Larson is ready to tell his secrets.

Except it’s no secret that Larson is highly methodical and conscientious about where and what to place at the fair. “I never thought I’d be licensing the length of a hot dog,” he jokes, “but I have to in order to protect boundaries.” Protecting vendors from direct competition is an essential piece of the puzzle. At other fairs, one may find six corn dog stands and three lemonade carts on one block, which dilutes business for everyone.

At the Minnesota State Fair, each street mimics the restaurant experience: “Geographical balance is tricky. The blocks should be laid out like a menu: beverages, appetizer, side dish, entrees, sweets,” Larson says. It’s all about efficiency and creating the best customer experience. “We want the guests to have the opportunity to buy what they want where they are without having to go to the other end of the fair for a lemonade.”

That same balance must be considered when adding new vendors or even new menu items. It’s also no secret that acquiring one of those coveted vendor spots is about as easy as becoming a member of the Knights Templar. The challenge of getting in are mostly mathematical. Since the fair has no current plans to expand its already massive 320-acre footprint, a vendor spot has to vacate before a new vendor is invited in, and such turnover is rare. Of the nearly 500 applications for a new vendor spot last year, three were introduced to the fair.
“The first thing I am looking for is filling a need — do we need a protein on that block or a dessert? Then the vendor must have plenty of related experience. I always say you have to play a lot of football before going to the Super Bowl,” Larson smiles. “You need to get in and get it done. The capacity and speed is like nowhere else. We also need to have the right spot to fit the vendor’s specific needs such as truck access on the outside periphery.”

It’s all very clinical sounding, but Larson says the public is definitely heard. “We get very few complaints considering the massive crowds we get through here. But I listen to what people want.”

At the end of the day, customers vote with their dollars, and there are a lot of those votes cast in Sweet Martha’s direction each and every day of the fair.

“People come to our fair to buy their favorite foods. They’ll talk about the new foods, but they are going to get what they came for, and we see that in the top-10 items. With almost 500 items to choose from, these top 10 dominate every year,” Larson explains.

“If a product is so popular that the lines are affecting the customer’s over-all fair experience, it is our responsibility to help, whether it’s with a second or third location, or by expanding the building or changing the layout of the location to get people what they want faster, so they have a better fair experience,” he says. Standing in a 20-minute line in August isn’t anybody’s idea of a good time, but neither is walking away without that yearly bucket of cookies.

After all those years, what will Larson miss the most about his time at the fair? “First of all, I plan on still being around, a lot,” he smiles, “but I will miss the energy. We are just adrenaline junkies here. And besides, where else do you get permission to eat an entire bucket of cookies? In fact, it’s encouraged!”

Just five new food vendors were accepted to the 2018 fair

The Minnesota State Fair will have five new food vendors when the gates open on Aug. 23. Here’s a list of the vendors and their offerings: