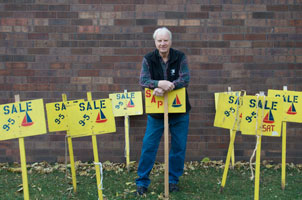 Honor Roll recipients will be recognized by Mayor Chris Coleman and council president Kathy Lantry at a citywide event 5:30- 7:30 p.m. Friday, Jan. 30, at the University of St. Thomas. The public is invited to the event, which includes light hors d’oeuvres and music by the Davu Seru Jazz Trio. Tickets are $10 in advance or $15 at the door. You can purchase a ticket by sending cash or a check to Summit Hill Association, 860 St. Clair Ave., St. Paul, MN 55105, or by going to  the ticketing site here.

Meet your neighborhood heroes below:

Jon Knox Jon Knox has been the board chair of the District 10 Como Community Council for five years. He was elected during a time of organizational crisis when the council had lost the neighborhood’s trust and was effectively bankrupt. Knox’s steady hand, commitment to a fair and open deliberative process, and personal time investment were major factors allowing the council to successfully navigate the crisis and become an effective advocate for the neighborhood.

A resident of the South Como neighborhood that was annexed to District 10 in 2014, Anne McInerney has jumped full force into becoming an active volunteer with the District 10 Council. She spearheaded the effort to successfully launch a neighborhood-wide ice cream social, worked hard to help raise funds and supported other programs. Modest and willing to let others take the limelight, McInerney exemplifies the best of neighbors working together to improve the Como Park neighborhood.

Ted Blank has been a board member, committee chair and treasurer on the District 10 Community Council. He later served as the sole paid staff person for District 10, where he helped create successful fundraising and community-building events. Blank helped guide District 10 through the expansion to include the South Como neighborhood.

Stephen Mastey was instrumental in completing Phase 1 of the Raymond Avenue traffic-calming project. He worked hard managing landscape aspects of the project in coordination with the city, above and beyond what was expected from a resident acting in his capacity. He worked consecutive physically grueling days to plant community and resident rain gardens in South St Anthony in August. The neighborhood is greatly improved as a result of his efforts.

Transition Town marches in the 2014 Fourth in the Park parade.

The Transition Town ASAP initiative has engaged the community in conversations about citizen action to lower District 12’s energy use. Members of the initiative have energized and empowered neighbors to take action, developing solutions in multiple areas that can be implemented communitywide. Their passion and commitment to this important issue has garnered interest from around the metro and their vision was recently validated when they won a $15,000 three-year grant from the St. Anthony Park Community Foundation.

For the last 24 years, Rich Nelson has spearheaded the neighborhood garage sale each September. He hand-painted every one of the wooden “sale boat” signs that mark each sale; he collects the fees, places advertisements; he compiles the addresses of each sale and puts it all together in a map. He does it all. Nelson continues to build community through his garage sales in St. Anthony Park.

Mary Beck, as retiring chair of the St. Anthony Park Area Seniors, has overseen a time of dynamic transition for this critical nonprofit. She led a board renewal that produced a partnership with Wilder Research to undertake a major needs and concerns assessment of the senior population in District 12.