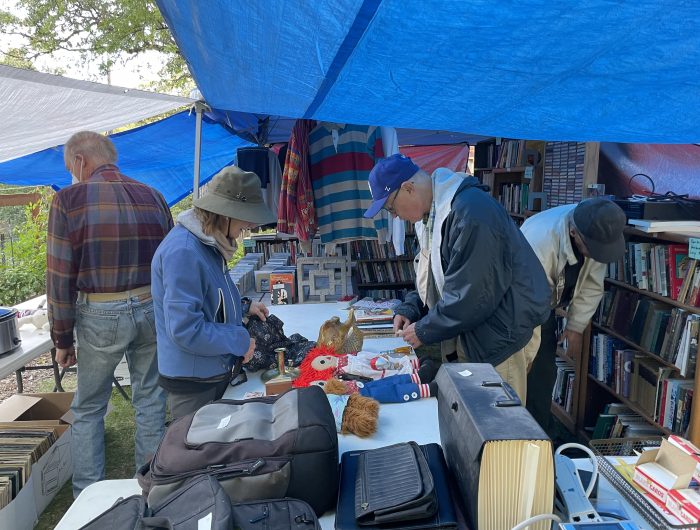 The Bugle got a mighty boost from a big yard sale that was hosted by Grant Abbott and Elaine Tarone during the last weekend in September.

All of the yard sale proceeds, which topped $1,600, were donated to the Park Bugle.

“We are very thankful and humbled by Grant and Elaine’s generosity in supporting the Bugle,” said Scott Carlson, the newspaper’s managing editor. “It is one example of how much this community loves the Bugle.”

Abbott and Tarone have been Bugle readers and supporters since moving to St. Anthony Park in 1981. The couple came from Seattle to Minnesota in 1979 when Tarone accepted a position at the University of Minnesota as a professor of applied linguistics.

Together, Abbott and Tarone spent many hours preparing for their yard sale. “Oh golly,” Tarone recalled. “It’s taken us about a week to move the books down from the attic.”

Their yard sale featured more than 600 books, of which about half sold. Tarone estimates that 80 percent of the other items were sold, despite a bit of rain one morning of the sale.

“People were extremely positive when learning all proceeds were going to the Bugle,” Tarone reported. “In fact, I think that resulted in much higher receipts than we would otherwise have had.”

Abbott agreed, noting, “When people paid for their items, they often overpaid, knowing the proceeds were going to the Bugle.”

For Abbott and Tarone, supporting the Bugle means simultaneously supporting and strengthening the neighborhoods served by the Bugle.

“If you want to have neighborhoods, you need to have something that connects people,” Abbott said. Pointing out the struggles of local businesses and the decline of church membership across the county, Abbott believes the Bugle has a role in strengthening the community.

During the sale Abbott said he witnessed connections between people—as neighbors, artists and professionals.

“Connections were being made,” he said. “New relationships were begun. And most importantly, there was great affirmation of the work of the Bugle.”

Steve Plagens, Park Bugle treasurer and chairman of the advertising committee, reports that about one-third of the Bugle’s revenue comes from donor contributions.

“Whether it’s a small donation or a dedicated yard sale, the support of our readers is crucial to the well-being of the Park Bugle,” Plagens said. That income, he noted, is essential to cover the costs of the Bugle’s journey to readers’ mailboxes—from writing to production to printing to distribution.

Plagens added, “It’s no secret that newspapers have long been facing uncertain times as the move towards digital eroded their advertising base. COVID in many ways has hastened that process and we’ve seen many publications—large and small—go under in recent years.”

But when neighbors, like Abbott and Tarone, and local businesses continue their financial support of the Bugle, the paper “remains financially healthy and able to continue sharing stories that enhance the quality of life in our community,” Plagens said.

Sarah CR Clark is a regular freelance writer for the Park Bugle and a resident of the St. Anthony Park neighborhood.