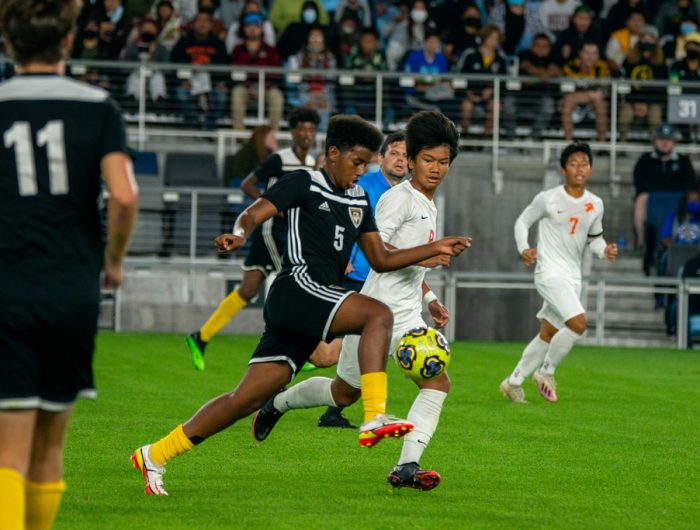 Memories made and funds raised

The Mayor’s Cup soccer matches at Allianz Field gave the high school players from Como and Humboldt high schools a joyful experience that will be cherished forever by everyone in attendance. Bell Bank partnered with Minnesota United to sponsor the event and provide free admission.

Club officials lifted the attendance cap that was previously advertised and reported more than 2,000 fans in the stadium.

Beyond the perfect grass and field conditions, the stadium’s production team supplied the same game day atmosphere that the professionals receive. From using the locker rooms, to the walk-out music, giant video screen and school logos on the scoreboard, the event and setting were jaw-dropping for the players and first-time Allianz stadium fans.

The girls game was a tightly contested affair with limited scoring opportunities. But early in the second half, Como senior Lenia Lopez powered a shot from eight yards out into the back of the net. The goal would hold up to be the difference as Como won 1-0.

“We are so grateful to have had the opportunity,” said Como senior defender Lucy Hebble. “We’ll remember this experience forever.”

The boys game was fast and furious with several quality scoring opportunities for both teams. But even after two overtime sessions, the score remained locked at 0-0.

A penalty kick shoot-out isn’t used by the State High School League in the regular season. But when you’re Mayor Melvin Carter, and two St. Paul teams are playing for the Mayor’s Cup, you ask the crowd if they want a penalty kick shoot-out. The answer was a resounding, “yes,” and the mayor approved.

All four teams were honored by the mayor in the postgame ceremony. They all represented their schools with outstanding effort and inspired the St. Paul soccer community.

“It was amazing. I never would have thought we’d be able to play here at Allianz,” said Como boys captain Soren Berg. “To be the first high school teams playing in this stadium—it was more than we ever could have imagined.”

Como junior Charlie Power-Theisen didn’t know what to expect when he lined up with 300 other high school runners for the Maroon Division boys race at the Roy Griak Invitational in late September.

When he finished the 5K race over the hilly terrain at the U of M Golf Course in first place, his fatigue took a back seat to satisfaction.

“I was surprised that I won,” Power-Theisen said. “I was excited. It felt good. Especially after I recovered because I was super tired. Going forward, it’s a big confidence booster.”

Power-Theisen is the defending St. Paul City Conference champion. But “the Griak” meet brings in top runners from across Minnesota and neighboring states. Since last year’s meets were limited due to stricter COVID-19 precautions, top runners haven’t been able to see where they stand against each other.

Power-Theisen enjoyed the opportunity and obviously took full advantage. He hopes to keep building strength and endurance as he and Cougar teammates prepare for the Section 4AA Meet at the end of October—and the chance to qualify for the Minnesota State Meet on Nov. 6.

Through a partnership with the United States Tennis Association, they raised $7,200 at the Twin Cities Marathon on Oct. 3. The USTA matched donations Moua and Yang received on their own with $100 for every mile the duo ran.

Moua trained for his first marathon and successfully completed the 26.2 miles. Yang, a veteran marathoner and former Harding tennis coach, did the 10-mile run this year. There is value in athletic department leaders modeling commitment and training to reach goals.

“I don’t consider myself a runner,” Moua said. “But this shows that even if you’re not great or even good at something, if you stick with it, it will pay off in the end.”

Yang says the athletic department fundraising is a collaborative effort with the Como Park Booster Club, and that they’ve found unique ways to try and to support facility needs.

“In 2019, we raised over $32,000 to refurnish our weight room with a new treadmill, bike, elliptical, dumbbells and another set of bleachers which we have yet to receive from the district.” Yang said.

As for more marathons?

“I guess we have made it a tradition now to run and fundraise for our students,” Yang said. “It is a healthy and good cause that we will continue to take advantage of.”

Eric Erickson is a social studies teacher at Como Park Senior High School, a longtime youth athletic coach and a regular freelance writer for the Bugle.