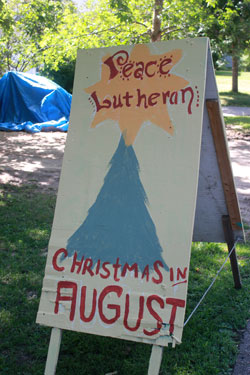 Dozens of volunteers took part in the Aug. 9 and 10 event, which helps homeowners with chores like painting, roofing, yard work, plumbing and, in one case this year, building an art studio.

Painter and sculptor Dan Mackerman, a member of the church, volunteers each year with the program, but this year he’s getting the help he needs to build an art studio behind his house.

Mackerman, who had an 1,800-square-foot studio in the Chittenden & Eastman building at 2402 University Ave. for 19 years, was one of the many artists displaced when the building was sold in 2011 and turned into market-rate apartments. He left the Raymond and University area to rent a studio in Minneapolis that cost twice as much for half the space that he had.

Now, with a loan from a local credit union and the elbow grease of his fellow parishioners, he should be in his new digs by fall. The studio will give him the space he needs to work and teach classes.

Christmas in August has become a part of the fabric of Lauderdale, a community of nearly 2,400 people. The brainchild of Pastor Dave Greenlund, the program extends past those two days in August.

Volunteer Claudia Gilbertson said Greenlund gets calls throughout the year asking, “Are you the pastor that fixes furnaces?”

The church and its members can’t fix everything, Greenlund said, but often they find someone who can.

“The greatest benefit of all this is it brings people together,” Mackerman said. Though he and his wife, Vicki, are members of the church (Vicki is the church’s music director), membership is not a requirement to participate in Christmas in August.

“We have people who come over to help and to get work who don’t belong to the church,” Mackerman said. Church affiliation and economic status aren’t considered when Peace Lutheran puts a home on the Christmas list, Mackerman said.

“It has nothing to do with rich or poor, and there’s a very good reason for that.” When people receive this kind of help “nine times out of 10 they will step up to the plate” and help others, he said.