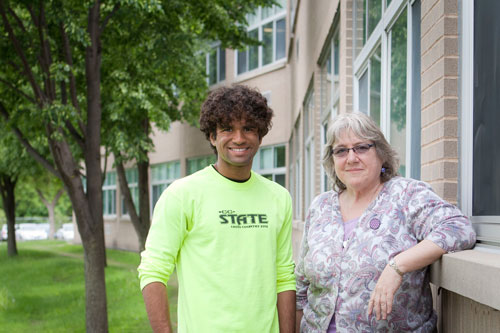 Wanted: Are you pragmatic, patient, decisive and open to innovation?

If so, you may be just the person Como Park Senior High School incoming senior Marshal Landrum needs for his team.

Earlier this summer Landrum was one of 12 American Bezos Scholars, high school students who survived a rigorous screening process to receive an all-expenses-paid trip to the prestigious Aspen Ideas Festival in Colorado. There, the students—each with a teacher from his or her school—rubbed elbows with heavy-hitters such as Supreme Court Justice Elena Kagan, world-famous cellist Yo-Yo Ma and Internet crowd-sourcing innovator Perry Chen, co-founder of Kickstarter.com.

Landrum and Como biology teacher Kathryn Kahn’s participation was funded by the Bezos Family Foundation, an education-oriented nonprofit run by the parents of Jeff Bezos, founder of Amazon.com.

For Landrum and Kahn it was the trip of a lifetime.

“A life-changing experience,” is how Kahn describes it.

Says Landrum, “So many people can get a 4-point GPA or a 36 on the ACT, but what sets people apart is when they lean out of [their] comfort zone to accomplish their goals.” For Landrum—a top scholar and high school athlete—part of leaning out means organizing an ideas festival right here in his home neighborhood.

“We learned that it’s important to surround [ourselves] with people with the same passion, but different skills,” says Kahn.

Between the two of them, they have “charisma, moxie and confidence.” (That’s Landrum.) Also a passion for teaching, optimism, integrity and good communication skills. (Kahn.) What’s needed to bring the local ideas festival to life is a few more team members with the skills listed in the first paragraph of this article.

Landrum hopes to recruit from among his fellow students and the faculty at Como Park Senior High School, but he also wants to involve the community as a whole.

As for the theme of what they’re calling—at least in its early stages—the Big Ideas Festival, Landrum is still a little hazy.

“After all we’ve got a whole year to plan,” he says. His personal passions are “the environment and physical fitness,” but he also notes that “the community will guide me to what needs emphasis.”

The Aspen Festival offered a bewildering array of possibilities, but for Landrum one speaker stood out. “Rye Barcott was the most awesome,” he says. A former Marine who started a program called Carolina to Kibera, dedicated to improving living conditions in a region of Kenya, Barcott made such an impression that Landrum committed his words to memory: “Take a risk in service to others.”

That mixture of idealism and daring-do held just the right appeal for the 17-year-old Eagle Scout. “I feel that the only way to really make a difference is to go out on a limb,” he says.

And Landrum isn’t hesitant about giving an example of what he has in mind. “In my immediate neighborhood,” he says of his home in Como Park, “there was a time when we had a lot of break-ins during the day. They were minor, but kind of scary.” Neighbors banded together via an email list and a Facebook group, he says, “and we started a night watch group. We got together to preserve the safety of the community . . . and after a month, it was done. We’re still alert, but we haven’t had a break-in lately.”

Kahn, who Landrum diplomatically describes as “among the top three” of his teachers at Como, attended the conference at her pupil’s invitation. She “prefers to let the students take the lead” in implementing the lessons of Aspen, she says, but admits to being surprised at how much relevance the festival had for her personal goals.

“You get used to having problems in your world in education,” she says. “It’s so hard to get the job done. It takes a lot of energy. [Before Aspen] I felt that I couldn’t approach a huge problem because it’s so big—I’m so busy. But [Aspen] forced me to state my passions. It gave me creative tools. The possibilities for me were reframed.”

She marvels at the changes the festival produced in her mind-set. “When you’ve had a full life and you’re 59 years old [it’s remarkable] to have an experience [like this.]”

Kahn was especially impressed by Arianna Huffington, founder of the left-ish Internet website, the Huffington Post. Huffington, who Kahn describes as “very powerful and wonderful to listen to,” has developed a “third metric” by which to measure accomplishment. “Most people are measured by money and power,” Kahn says. “She’s talking about [using] wisdom or well-being as a measure [of success]. She was awesome.”

Landrum’s Aspen experience will influence his life choices for years to come, he says. He wants to apply to St. Olaf College in Northfield, with an eye to following a career in biomedicine, perhaps as a doctor, although “that could change.” What he does know is “no matter what career I choose, I won’t be just trying to advance myself, but I’ll be helping my community. [Aspen] helped me get rid of my 17-year-old self-centered attitude.”

Asked about a favorite experience at the Aspen festival, Landrum—who is an enthusiastic Nordic skier—bypassed mention of the famous faces and the inspiring lectures. Instead he talked about an experience that might also provide an inadvertent metaphor for what it feels like to be a young man on the brink of adult achievement.

“The best thing at Aspen,” he says, “was going up on the gondola to the top of the mountain. I could see the view.”

Judy Woodward is a reference librarian at the Roseville Library and a regular contributor to the Park Bugle.

Marshal Landrum and Kathryn Kahn want to know what inspires you, what concerns you and what changes you would like to make in your community.

If you are interested in sharing your ideas and want to learn more about the Big Ideas Festival, email bigideasfestival@gmail.com.