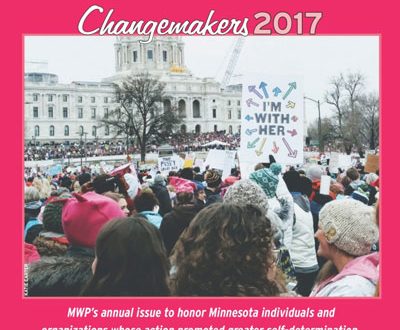 The new year will bring about a new beginning for Kathy Magnuson and Norma Smith Olson. The duo, longtime co-editors of the Minnesota Women’s Press, have been active with the publication in some capacity for three decades. They surrendered the reins to longtime collaborator Mikki Morrisette in mid-December.

Morrisette has 15 years of experience with the Press as a writer and copy editor and has worked with the New York Times and Time Inc.

“Every editor and publisher puts their own frame on things, so we do expect some changes,” Olson said. “However, we are confident that Mikki will continue our legacy and maintain our mission of telling women’s stories in ways that build community and encourage change.”

Although both Magnuson and Olson agree that it is time to step away, the decision did not come lightly for either.

“It was a tough deliberation because this has been such a labor of love for both of us,” Magnuson said. “Not only has it been our steady income, but more importantly, this is a mission that we are both very invested in. We are, however, excited to see the direction that the new generation plans to take the Women’s Press.”

Minnesota Women’s Press Inc. was founded by Mollie Hoben and Glenda Martin in 1984 to publish a biweekly newspaper, the Minnesota Women’s Press. Over the years, the publication has grown and expanded. In February 2009, the Press transitioned to a monthly magazine format. The magazine is distributed for free at more than 500 locations and events in the metro area. The current readership online and in print is estimated at 115,000. In addition to the print publication, Women’s Press provides opportunities for women to meet, read, learn, write, talk and explore through outlets such as the Minnesota Women’s Directory, BookWomen Magazine, the Center for Feminist Reading and the WoNews e-letter, released four times a month.

“We spent the early years looking for investors and a lot of people said this would never work and that it was a bad idea that no one would support,” Olson said. “People didn’t believe that anyone would want to read a magazine only about women. Even after we published, we were still getting push back from potential advertisers. They would want to see a year or two of work before they would buy ads.”

Through hard work, dedication and a willingness to stick to the mission, the staff and management of the Women’s Press were able to turn the tides.

“We stayed true to what we’re not and what we are,” Magnuson said. “We focused on women’s health, education, spirituality and politics. These are the things that matter to women in their everyday lives. It is tempting to follow ad dollars, but we resisted that and it has cost us financially. Our readers, though, are smart, and they reward our high editorial integrity.”

Eventually, advertisers caught on and the task of securing financing became a less daunting.

“We now have a reputation in and around the Twin Cities and calling on ads requires a lot less explanation than it used to,” Magnuson said. “Our credibility speaks for itself, and I believe we are a real asset and a voice for women.”

Fans of the publications feel the same way.

“We regularly get calls or emails from readers that tell us that we are enlightened and that we are a breath of fresh air,” Olson said. “I hear from people who thank us for being one of the few progressive voices in greater Minnesota. Others who have moved into the area credit the Women’s Press as a sign that this was a welcoming place.”

As for what’s next for Magnuson and Olson, well, they don’t rightly know.

“I think we will both be taking some time to figure out what we want to do next,” Olson said. “This is going to be a very big change for us. I think maybe we need to sleep in for a few days before we can make an assessment in regards to what’s next.

“I think I need to take a sabbatical and then decide how I want to carry on being involved in the issues that I have always valued, Olson added. “I also want to learn new things and do new things.”

Jason DeMoe has worked as a newspaper reporter for seven years in both Wisconsin and Minnesota. He lives in White Bear Township, enjoys the outdoors and has hiked at least one trail in every Minnesota state park.