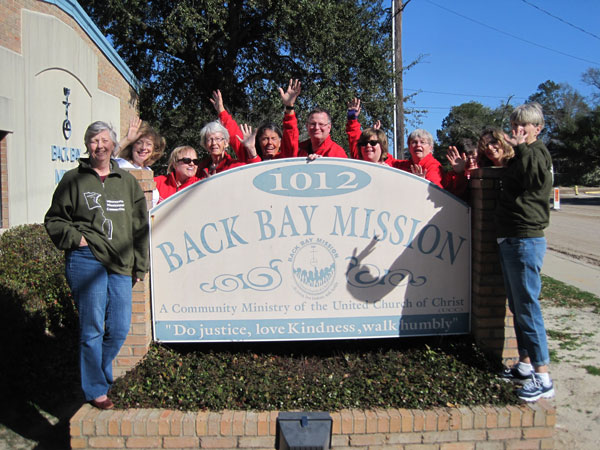 Mission trip to Biloxi gave volunteers ‘more than we gave’

Congregants and the Rev. Victoria Wilgocki (fifth from right) spent a week in Biloxi, Miss., volunteering at Black Bay Mission.

How do you combine a service project, an educational trip and a life-changing experience into one event? Go to the Back Bay Mission in Biloxi, Miss., which is just what 10 members and the Rev. Victoria Wilgocki of St. Anthony Park United Church of Christ (UCC) did Feb. 5-11.

Those 11 (one man and 10 women, mostly retired) joined seven other Minnesotans as a team that worked, bunked, cooked, ate, sang, prayed and learned together. They had various reasons for going: Some had never been to the Deep South, one person had used social services in the past and wanted to give back, one had heard about the Back Bay Mission as a child in Sunday School and wanted to be a part of the experience, and all wanted to go to help people in need. The trip was funded by the church, individual gifts, funds raised at a concert and bake sale, a grant from Chapel Hill UCC in Edina and participant fees.

The volunteers prepared for the trip by reflecting on and sharing their stories, journaling and discussing their anxieties and issues of privilege, poverty and racism, Wilgocki said.

Back Bay Mission was established in 1922 by the First Evangelical Church of Biloxi as an outreach program, providing education, clothing, shoes and medicine to poor residents of the city. In the 1940s, the mission provided open houses for the growing number of service personnel stationed in Biloxi, and in the 1950s a nursery school, credit union and Teen Town were added to the ministry. (In 1957, Evangelical and Reformed churches joined with Congregational Christian Churches to form the United Church of Christ.) In the 1960s, a community center was built and included a craft shop, library, preschool and kitchen.

Even though integration and participation in the civil rights movement turned some church supporters away from the mission, Back Bay continued with involvement with the NAACP, Head Start and Planned Parenthood, and added a neighborhood-improvement program and a women’s center. When the UCC of Biloxi dissolved in 1974, Back Bay was still supported by and became the only presence of the UCC on the Mississippi Gulf Coast.

Since the 1980s, Back Bay has added a Loaves and Fishes program, a preschool to prevent substance abuse, an AIDS task force, a thrift store, homeless-housing initiatives, work camping and emergency assistance. When Hurricane Katrina hit in 2005 and six of seven buildings were damaged beyond repair, Back Bay rebuilt and added a day center for the homeless and supportive housing for veterans.

Volunteer mission trips like the one from St. Anthony Park have been a part of Back Bay since the 1960s. More than 800 people come each year from all over the country to stay in the Mission House and serve others by doing housing restoration (both new building and rehabilitation of older homes), working in the food pantry, doing laundry, and cleaning and monitoring the supply room in the Micah Day Center.

St. Anthony Park UCC volunteers had four work opportunities. Some worked at “Miss Kitty’s” house, getting it ready for rehabilitation by taking walls down to the studs, ripping out toilets, sinks and floors, and removing all debris—two large dumpsters-full (a very satisfying job, according to Wilgocki). Others worked in the food pantry, escorting the clients as they made their food choices, or at the Micah Day Center, where the homeless can shower and wash their clothes. The fourth option was to work at Loaves and Fishes cooking and serving hearty hot breakfasts and lunches to the homeless and food-insecure.

Each person in the group had at least one interaction that was very profound, hearing stories of hardship and resilience that they will carry with them for the rest of their lives, said Wilgocki. They learned that poverty can be generational or situational, but that most people were generous and grateful, with an “openness of heart” that is unique to the South. They learned that some are homeless by choice, or due to mental illness, addiction, or a string of bad luck. And they also enjoyed seeing the beauty of Biloxi and trying the local cuisine.

Every person was stretched spiritually, said Wilgocki, examining the meaning of faith and justice, compassion and servanthood, and seeing Bible stories in the light of living and working in community. The group will share its experiences during a worship service at St. Anthony Park UCC, 2129 Commonwealth Ave., on Sunday, March 5, at 9 a.m.

Wilgocki would do it again, she said. “We got more than we gave.”