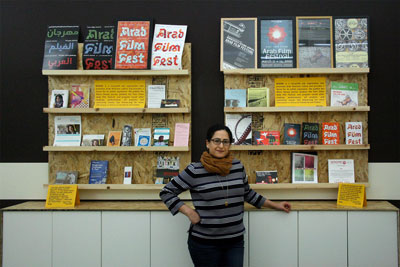 Picture an ill-assorted group of urban dwellers who escape their stifling daily lives by spending their evenings smoking, drinking and joking, passengers aboard a houseboat as it floats down the River Nile under a jeweled sky.

It sounds like a movie, and in fact it is a scene from a classic Egyptian film based on Nobel Prize winner Naguib Mahfouz’s novel Adrift on the Nile. It’s also a cinematic representation of an aspect of Arab life that doesn’t get much traction in the American popular imagination. Whatever else can be said about it, the scene couldn’t be farther from the standard Hollywood version of wild-eyed Arab terrorists.

And that’s the point.

Images like this one may soon become better known to area residents thanks to Mizna, the Arab-American arts and cultural organization based on University Avenue in south St. Anthony Park. Mizna recently won a $40,000 Knight Foundation grant to produce a series called Arab America at Home.

According to executive director Lana Barkawi, the series is “designed to take our programming to the broader community in St. Paul. We want to make the connection that Arabs are part of the community, and the cultural production of the Arab-American community is part of the greater American art and culture.”

The planning process has just begun, but Barkawi and her colleagues are talking about mounting outdoor screenings of classic Arab films like Adrift on the Nile, as well as holding picnics and “literary conversations” in conjunction with the semi-annual publication of the group’s journal Mizna: Prose, Poetry and Art Exploring Arab America.

The long-term goal is to introduce area residents to the richness and complexity of Arab culture and to the nuanced artistic and literary contributions of Arab-Americans.

Mizna is a poetic Arabic word that Barkawi defines as “a desert cloud that holds the promise of rain and shelter from the sun and heat.” The organization was founded in 1998 by local Lebanese-American teacher Kathryn Haddad. Its original goal, says Barkawi, was to publish a literary journal that would offer Arab-Americans “a respite from the broader culture in the West [which] may not feel so inviting, understanding and comfortable.”

It’s a respite that Barkawi has experienced first hand. Raised in California as the daughter of Palestinian-American immigrants, Barkawi, now 40, recalls the first time she attended a literary reading sponsored by Mizna, when she was a relative newcomer to the Twin Cities in 2003. At the event, local poet Nahid Khan recited her “Ode to Scheherazade.” A tart deconstruction of one of the West’s most enduring mythic images of the Arab world, the poem begins, “I am not Scheherazade, a shimmering shadow, emanating Middle Eastern mystique.”

“I remember feeling astounded that I was hearing something that related to me culturally,” Barkawi said. “I’d never before heard expressions of our community by our community.” She adds that, to an Arab-American, “It feels very important to see some facet of your story reflected on the page.”

“Minnesota doesn’t have such a huge Arab population,” she says. Yet for 15 years, Mizna has “maintained [its] presence with the nation’s only journal of Arab-American literature and one of the country’s largest Arab film festivals.”

The organization’s offices at 2446 University Ave. W., Suite 115, were founded initially as a way to provide support for the journal. Over time, activities have expanded to include Arabic language classes, as well as lessons in Arabic drumming on an instrument called the derbake, which Barkawi likens to the Indian tabla drum. Students include second- and third-generation Arab-Americans “who wish they had a better grasp” on their ethnic and linguistic heritage, as well as non-Arab locals with an interest in the culture.

With the Knight grant, Mizna sees an opportunity to reach out to those with fewer ties to the Arab community.

“We know that the broader public is not Arabic,” she says, “but there are those that hunger to know what’s beyond the headlines.”

The Mizna community is both nonsectarian and nonpolitical, but members are not naïve. While they count members of several faiths and many shades of opinion within their ranks, they understand that bigotry and anti-Muslim prejudice continue to be daily reality for many Arab-Americans.

The best way to counter anti-Arab stereotypes, says Barkawi, “is simply by doing the work that we do. We present complex, beautiful, challenging work from our community. A specific story [in the journal Mizna] can take on a life of its own when the reader sees the universal in it and draws a connection to his or her own life. We hope that presenting culture from our community will break down bigotry.”

As for those within their own ranks who object to films like Adrift on the Nile, with its suggestion of alcohol use among traditionally abstaining Muslims, Barkawi has a forthright response: “Many of us in Mizna [understand that] religion is not perfectly lived by its adherents. There’s not simply one way to be a good Muslim.”

Mizna charts a careful course in portraying and serving a “complex and pluralistic” Arab-American culture. For example, at a recent reading held during the month of Ramadan, when observant Muslims fast from sunup to sundown, Mizna organizers tried to take an inclusive approach. There were snacks served after the performance for traditional Muslims who were ready to break their fast. For others, there was also wine.

Will Mizna continue to thrive as a culturally based organization, as the American genius for assimilation does its invisible work among subsequent generations of Arab-Americans whose connection to Middle Eastern homelands becomes more and more attenuated?

“We don’t take a stand on assimilation,” says Barkawi. “Mizna exists in a very active social media world, but for subsequent generations, there has to be an explicit decision to stay connected.”

Barkawi is more interested in the present. She’s proud of the increasing role Mizna has been asked to play in the Twin Cities art scene, co-sponsoring events at the Open Book center in Minneapolis and participating in Northern Spark, an all-night summer arts festival that lights up the Minneapolis sky on the second Saturday in June.

“We’re proving that Arab art is something that’s happening right now,” she says. “It’s a vibrant scene.” Find out more about upcoming Mizna events at mizna.org.

Judy Woodward is a reference librarian at Roseville Library and a longtime contributor to the Park Bugle.