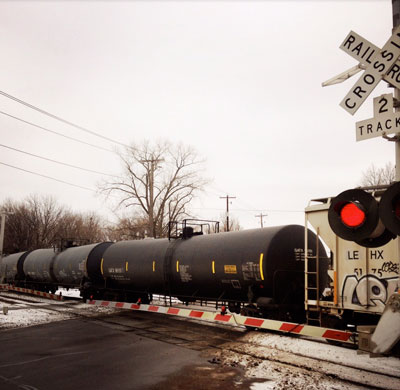 Routing traffic over or under the Como Avenue Burlington Northern Santa Fe rail crossing southeast of Lake Como (shown here) is a top-priority recommendation in a recent study by the Minnesota Department of Transportation of railcrossing safety statewide. Photo by Becky Kapell

Millions of gallons of volatile oil from the Bakken fields in North Dakota pass through the rail crossing just south of Lake Como every day.

What are the chances that a car or bus will collide with an oil train, causing a derailment and fire?

Slight, says the state agency that nonetheless is proposing a $25 million construction project to make sure such a catastrophe never happens.

Routing Como Avenue traffic over or under the tracks is a toppriority recommendation in a recent study by the Minnesota Department of Transportation (MnDOT) of railcrossing safety statewide.

Dave Christianson, the MnDOT rail planner who managed the study, discussed the findings at the Feb. 2 District 10 Como Community Council’s Land Use Committee meeting. He also laid out the facts relating to the increased shipments from the Bakken fields and, because railroads are federally regulated, the limits to what local and state officials can do to control the trains.

It’s a critical issue in the minds of many because of a series of mishaps elsewhere involving Bakken crude, including a massive fire resulting from a derailment at Casselton, N.D., in late 2013; an earlier disaster at Lac-Megantic, Quebec, in which 47 people died; and most recently, an oil train derailment in West Virginia on Feb. 16, where 20 rail cars caught fire and caused the evacuation of two nearby towns.

Eight oil trains enter St. Paul from the west each day, traveling through St. Anthony Park, Como and the North End before turning south and eventually crossing into Wisconsin on the way to refineries in the East. A train can have up to 100 cars, each carrying 30,000 gallons of oil.

All told, 55 to 70 trains per day pass through the Como Avenue Burlington Northern Santa Fe (BNSF) rail crossing, which is equipped with a set of gates to block oncoming vehicles.

MnDOT sees the at-grade crossing as a priority for a safety upgrade because the surrounding area is densely populated, with 3,500 people residing within a six-block radius.

Kevin Dahms, a member of the District 10 Land Use Committee, has a personal stake in the debate, and after the meeting talked about living within a block of the BNSF tracks in South Como.

“When I bought my house, I was concerned about noise from the railroad, but people said I’d get used to it and I have, to a degree,” he said. “At night, it can be difficult to sleep if a train starts up after standing for a while, because there’s a loud ripple of sound as it gets going. But I never thought about oil trains.”

Shawn Korby, a realtor who has sold a number of homes close to the tracks, said it’s typical for prospective buyers to wonder about the proximity to the railroad. But he doesn’t think most of them realize what’s being transported.

“I myself live only five homes from the tracks on Chatsworth and am starting to follow the news on this quite closely,” he said. “An accident involving oil would be a completely different ballgame than one involving some other commodity.”

During his presentation, Christianson said that prior to the recent slump in oil prices and slowing of production, the number of Bakken oil trains was projected to double by 2023. That still could happen, he cautioned, if prices rise. Pipelines could decrease train traffic, but producers favor rail, because it gives them the flexibility to go after the best price in the marketplace, wherever that might be.

The current tank car design dates to the 1950s and an improved one may receive federal approval in the months ahead, despite ongoing resistance from the oil companies. It came as news to some in the audience that it is the producers and not the railroads that own the tank cars.

The BNSF track through St. Paul is high quality, which accounts for the amount of traffic, and it is inspected at least weekly and sometimes daily, Christianson said. The maximum speed for trains has been lowered to 40 mph.

Overall, “the railroads are the safest they’ve been in 50 years,” Christianson said, adding that the odds of a derailment-causing crash at the Como/BNSF crossing are low. The MnDOT study stated there has been one vehicle-train collision at the crossing in the past five years, but no details of the incident were available.

There have as yet been no engineering or feasibility studies to determine whether an underpass or overpass would be most appropriate for the crossing.

A number of elected officials attended the meeting and their reaction to the MnDOT proposal was mixed. Amy Brendmoen, who represents Ward 5 on the St. Paul City Council, liked the idea of a grade separation, not only to deal with potential safety issues but also to eliminate the extended crossing delays currently caused by long trains. She has since written a letter to St. Paul’s delegation at the Legislature, urging support for the project and funding through increased property taxes for the railroads, something Gov. Mark Dayton has suggested might be an option.

Rep. John Lesch, DFL-St. Paul, who represents the area in the Minnesota House of Representatives, had reservations. “There are quite a few unknowns,” he said, “including who pays, what this would look like and how that affects the neighborhood and the environmental impact. With all the other transportation demands this session, there’s going to be a lot of competition.”

“Twenty-five million dollars is a huge expense,” Dahms said, stressing that he was speaking for himself and not the Land Use Committee. “But if it prevents a drunk driver from causing an accident or people from getting stuck on the tracks, it may be worth it.”

The transportation bill introduced in the Minnesota Senate by Sen. Scott Dibble, DFLMinneapolis, includes funding for grade separations, but a similar measure had not been introduced in the House of Representatives as of early February.

Officials said that if the grade separation proposal for the Como/BNSF crossing advances, there will be public hearings on the matter.