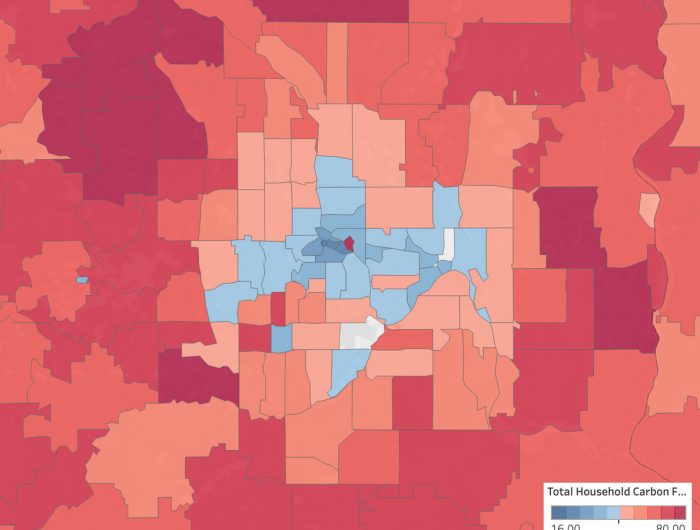 We urgently need to reduce climate-warming emissions, and living in a city produces fewer emissions per capita than living in a suburb.

But the Twin Cities have a problem: With more people needing housing, how do we make it possible for many more people to live in the city?

Why density? What kind of density?

The reason dense urban areas have lower emissions is that denser housing areas require smaller living units that take less energy to heat and cool than suburban houses. They also will support frequent public transit that encourages transit use.

Greater population supports walkable neighborhoods, with schools, libraries and businesses. Replacing car trips with walking and shorter commutes to work and school as well as shorter trips to get goods and services reduces transportation emissions. These aspects of dense urban areas are seldom available in a suburb.

The Metropolitan Council estimates that the Twin Cities’ population will grow by almost 300,000 in our current decade, then add another 500,000 by 2050. According to the St. Paul Planning and Economic Development Department, the vacancy rate in St. Paul was 4.4 percent in 2019, below the 5 percent rate needed for a well-functioning rental market. To accommodate new residents, it’s estimated St. Paul needs to build over 15,000 housing units.

Meanwhile the number of small multifamily buildings (2 to 4 units) has decreased significantly since 2000. As of 2017, these types of units still made up 11 percent of the housing units in St. Paul, providing options that are more attractive to many than are large multifamily apartments, such as the ones being built near University Avenue.

Can we accommodate new resi­dents with a variety of housing options in St. Paul, or will they be forced to the suburbs and larger climate impact? If housing density is increased in the core city, how can we reshape our current extremely low-density urban neighborhoods to add density while keeping what we love about them?

The St. Paul City Council asked the PED department to study how density could be increased in almost half the city (48 percent of the land) that is currently zoned for single family housing. The study has two parts, with recommendations from the first part approved by the Planning Commission in November 2021 and sent to the City Council for their consideration and possible final approval.

These recommendations make some minor changes to zoning to provide opportunities for more houses and auxiliary dwelling units (ADUs) in single family zones. These changes would:

• Remove the requirement that an ADU be part of an owner-occupied property.

• Allow larger ADUs and more than one residential building per lot if other zoning requirements are met.

These changes could bring greater density without altering the scale of the housing in areas now zoned for single family homes.

More significant changes will be considered in the second phase of the Planning and Economic Development study. To meaningfully increase density in the half of the city that’s currently zoned for single family housing, we need to either change zoning to allow more apartment buildings, or restore small multifamily buildings that have been lost over the past 20 years. This could include allowing duplexes, triplexes, fourplexes, townhouses and cluster developments in some areas currently zoned for single family housing.

Of course, Saint Paul can’t be the only place making changes: Suburbs must also find ways to reduce the emissions of those who live there. But we must take the steps we can to lower our impact on the climate. There really is no choice. We either make changes or be changed.

Sherman Eagles has lived in St. Anthony Park for 50 years and has been involved with the Community Council and its Land Use Committee, Transition Town—All St Anthony Park, the Creative Enterprise Zone, and other neighborhood organizations.