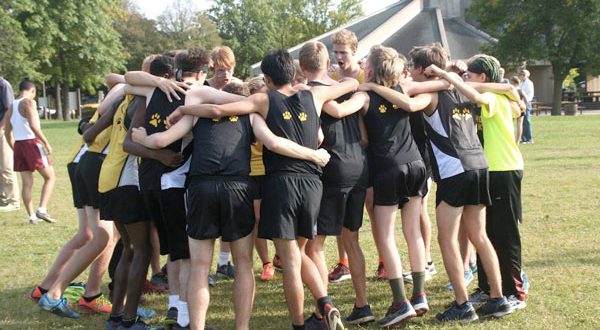 Runners from the Como Park cross-country team circle up prior to competing at the Battle Creek Relays during their successful fall season. Photo by Jim Rue

Football—As previously reported in the Bugle, the Como Cougars football team produced a memorable season that resulted in hosting a home playoff game. The team finished second in the Twin Cities Red Sub-District and compiled an overall record of 6-3. Senior leadership was the key ingredient for success.

Boys’ soccer—In the always-challenging St. Paul City Conference, the varsity boys struggled to find early wins. With hard work and resolve, however, the team improved and put together a four-game winning streak at the conclusion of the regular season and into the section play-offs, ultimately falling to Harding in the Section 4A Final. Senior captains Law Htoo, Kobby Owu and Kher Lin Kyaw were All-Conference selections.

The Como boys’ soccer program fields four teams. Como soccer alum Hussein Mohamed coached the C-team and was honored as the Section 4A Assistant Coach of the Year. Mohamed organized all the new freshmen players into a cohesive, unselfish unit that finished 14-1-2 while competing against ninth- and 10th-grade city and suburban teams.

Senior Florence Uwajeneza battled through injuries all season but peaked for the massive Roy Griak Invitational at the University of Minnesota. With more than 400 runners in the Maroon Girls’ Division, Uwajeneza finished first and earned the gold medal. She was unable to run at the St. Paul City Conference meet but earned all-conference honorable mention for her previous races. Freshman Claire Olson also received honorable mention.

Sophomore Kemal Bati was a leading runner for the Cougar boys, earning all-conference with a top-10 finish at the city meet and a first place at Pike Island. Senior co-captain Eli Pattison also had an outstanding season. Out of 50 runners at Pike Island, he placed second overall.

Volleyball—The Cougars’ volleyball program continued to have high participation with three teams consisting of the varsity, junior varsity and C-team. The varsity team finished with a winning record of 7-5 in the St. Paul City Conference and were led by all-conference seniors Maria Heeh and Madyson Sklar. Junior Sole Malia Chialamonti and sophomore Anisa Smith were all-conference honorable mention. The youngest players in the program showed great promise as the C-team won the conference tournament at the close of the season.

Girls’ soccer—It was a record-breaking season for the Cougars with all-time program highs reached for goals scored (91) and shutouts (13). That combination produced an overall record of 15-4 and a trip to the Section 4A Semi-Finals where Como fell to Mahtomedi, who went on to win the state championship.

For the second straight season, Shar Too was chosen All-State. She tallied 25 goals and was the second-leading goal scorer in the entire state. The team was young but had veteran leadership with senior captains Tu Lor Eh Paw and Emily Forstrom, along with junior captain Gigi Gabrielli. The team’s strong nucleus of players returning for next season includes all-conference sophomores Shar Too and Rebar Htoo and all-conference junior defender Celia Olson.

Girls’ tennis—Participation increased this season with the addition of several sophomores joining the program. The added depth brought more energy to practices and provided more flexibility for the varsity lineup and junior varsity exhibition matches. Sixteen girls were on the roster, led by senior captains Granda Sayavong who played No. 1 singles and Shyann Salverda who played No. 3 singles. Junior Victoria Hartwich-Cedillo played No. 2 singles. Sayavong was also Como’s recipient of the Jeanne Arth Sportsmanship Award, determined by a vote of the conference coaches.

Girls’ swimming— The Cougars combined with Johnson High School swimmers to form a deeper team and train together every day in the Como pool. The result was a third-place finish in the St. Paul City Conference. Senior Adrianna Tarver produced the best results of her career and achieved all-conference honorable mention. Sophomore Amira Boler also earned all-conference honorable mention.

Volleyball—The Pilots put together another strong season on the court and finished the regular season with a 7-4 record. In the conference tournament, Murray demonstrated its improvement as they defeated Parkway, a team that beat the Pilots in the first half of the season. That tournament victory propelled the squad to third place out of the 12 teams. The coaches noted that all players took their individual skills to new higher levels, supported each other extremely well and team spirit was consistently positive.

Girls’ soccer—With a winning record and a third-place finish in the St. Paul City Conference, the soccer girls stayed strong and continued to play with quality. In the final game, on a cold, gray and windy day on the Murray field, a late goal lifted the team to a 1-0 win over Washington and a satisfying conclusion to the season.

Seventh-grader Betty Hebble was the leading scorer for the team this season. Eighth-grade goalie Maddy DeGaetano was always a reliable presence in the net, making dozens of challenging saves and being selected most valuable player of the defense.

Boys’ soccer—With more than 50 players, the coaches formed an A-Team and B-Team and scheduled additional games to provide more participation opportunities. A talented group of seventh-graders stepped up to become the core of the A-Team and push the Pilots to a record of 6-3-1. Byron Mendoza was the team’s top scorer. The team captains were Damien Perryman, Gordan Van Sant, Soren Berg and Gabriel Albornoz Ruiz, who all modeled a strong work ethic and provided positive leadership.

Flag football—For the second consecutive season, the Murray flag football team finished undefeated with a record of 11-0 and claimed the St. Paul City Conference championship. The Pilots started the season winning games by large margins over many rivals, but the toughest games against the other top teams, Highland and Washington, were scheduled for the last two days of the season. Murray rose to the challenge defeating Highland 21-13 and clinching the title with a 27-21 victory over Washington.