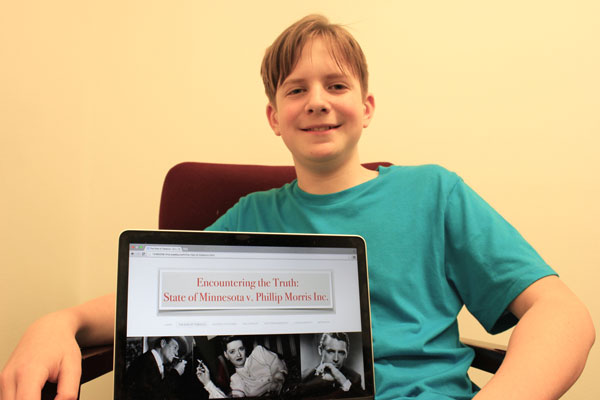 When the U.S. Surgeon General report confirmed the health dangers of cigarette smoking in 1964, tobacco manufacturers responded with counter-advertising campaigns: “More doctors smoke Camels than any other cigarette,” “20,679 physicians say Luckies are less irritating,” “L&M filters are just what the doctor ordered!”

The son of Catherine and Matt Skinner of St. Anthony Park, Skinner headed to Washington, D.C., on June 11 with his teacher, Courtney Major. His mom joined him a couple of days later.

He is the third Murray student to go to the national competition since the school began participating in the research competition a decade ago. Page Norman, an eighth-grader at the time, advanced to Washington, D.C., in 2007 and Jillian Brenner, who just finished eighth grade at Murray, competed last year at nationals.

Skinner is also the second in his family to go to the national competition. His sister Miranda competed in the website category when she was a seventh-grader at Capitol Hill Magnet School. Miranda was a big help to him, he said.

You can see Skinner’s website at 12485258.nhd.weebly.com. National History Day is an interdisciplinary research project for students in grades 6-12. Students can choose to write a paper or create an exhibit, documentary, performance or website.