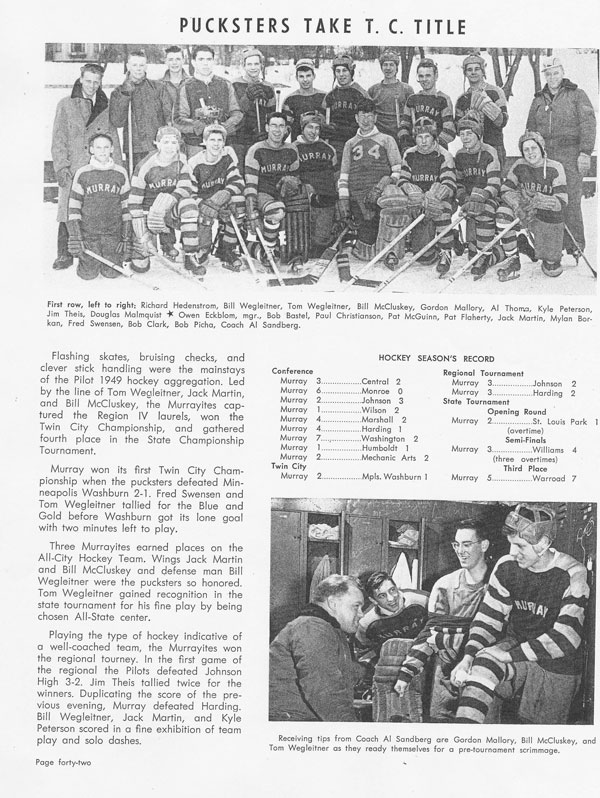 “Flashing skates, bruising checks and clever stick handling were the mainstays of the Pilot 1949 hockey aggregation,” according to Murray High School’s 1949 yearbook.

Gregory Page, a lifelong St. Anthony Park resident and member of the Murray High School class of 1963, and Tom Wegleitner, a player in that 1949 tournament, presented Wegleitner’s No. 28 Murray hockey jersey to the U.S. Hockey Hall of Fame in Eveleth last fall. Wegleitner was an all-tournament selection in 1949 on a team crowded with Eveleth greats, including John Mayasich and Willard Ikola, Page said. Wegleitner went on to captain the University of Minnesota’s hockey team in 1953. (Minnesota lost the NCAA championship game that year to Michigan.)

Murray—which was a grades 7-12 high school through 1979, was a 7-8 junior high school through 2013 and is now a 6-8 middle school—began its hockey program in 1944. Players apparently wore the Murray football jerseys that first year. New jerseys were purchased in 1946 and the jersey donated to the Hall of Fame is one of them, Page said.

Among the team members in 1946 was Jack Pearson, a St. Anthony Park resident who later coached hockey at Murray from 1969 to 1979.

“Pearson was one of the guys that got the neighborhood hockey going as a playground program in the Murray area in 1958 or so,” Page wrote in an email. “He first coached Midget hockey and then coached Murray junior varsity hockey, including a Twin Cities Championship team in 1960.”

In 1951, the last year of the 1946 jersey style at Murray (shown at left in the photo), both Murray and St. Paul’s Johnson High School were in the tournament. Johnson took second, and Murray took the consolation championship. Twelve years later, in 1963, Murray and Johnson again were in the tournament. Johnson took first and Murray lost the third-place game.

This was Murray’s last appearance in the tourney (and St. Paul’s last championship), said Page, who was one of two Murray All-Tournament players in that tournament along with teammate Mark Thompson. Thompson and Page went on to play at the University of Michigan.