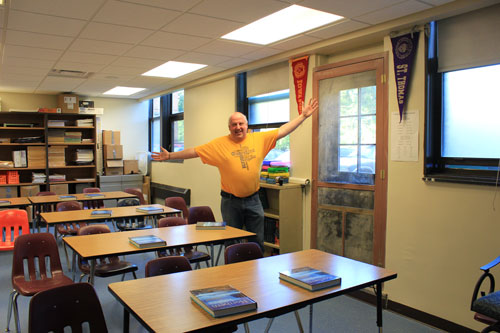 Sixth-grade teacher Ron Beck is enjoying his sunny new classroom in the new wing. His classroom had been the school kitchen. (Photo by Kristal Leebrick)

When students returned to Murray Middle School in September they were greeted with a little more elbowroom in the school’s halls and classrooms.

Murray unveiled a $2 million remodel this fall that includes a new sixth-grade wing and cafeteria. The school also experienced a significant decline in enrollment from last year’s 900 students to 693 this year.

Last year, Murray transitioned from a grades 7-8 junior high school to a 6-8 middle school. Part of the school’s overcrowding was due to an extra-large eighth-grade class. Now the three grades are fairly evenly split with 235 sixth-graders, 219 seventh-graders and 233 eighth-graders. The remodel took out the school’s swimming pool and replaced it with a state-of-the-art cafeteria and kitchen. The pool had not been used for several years, according to principal Stacy Theien-Collins.

The cafeteria floor was tiled to mimic the swimming lanes in the old pool and the former swimming bench along one wall was kept in the design, according to David Moll of ATS&R Architects, who designed the new space. The pool’s locker room is now storage space. The school’s former cafeteria was remodeled into five classrooms and two locker bays for the sixth grade.

“Now all the sixth grade is together and the new classrooms have windows,” Moll said.

At the school’s ribbon-cutting ceremony on Sept. 11, district superintendent Valeria Silva praised the architects and district project manager Andrew McGlory for getting the work done in 10 weeks and having it ready when school started.