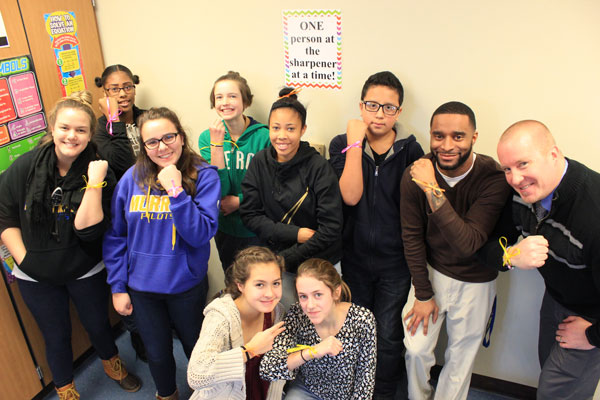 Some members of the Murray Dare 2B Real group show the ribbons they wore on their wrists on Feb. 9 to remind them to “check themselves” when they stereotype. Shown here, back row from left: teacher Kate Hunziker, Avani Holcomb, Stella LaCroix-Dulluhn, Amira Boler, Sadie Murphy, Hever Pliego, teacher Lorenzo Farley and assistant principal Jamin McKenzie. Kneeling are Fiona Juarez-Sweeney and Amelia Moseman. Photos by Kristal Leebrick

A poster hanging on the wall just up the stairway from Murray Middle School’s front office shows a photo of a black student holding up a sign that says, “I am not a criminal.”

Throughout the school’s hallways, similar posters are on display, all with students holding signs that challenge stereotypes: An Asian girl’s sign says, “Not all Asian are Chinese.” A black boy’s sign says, “I have two parents.” A white student’s sign says, “My parents are divorced, and I am not messed up.”

The posters are the work of Dare 2 Be Real (D2BR), a new student leadership group that is inviting the student body at this St. Paul Public School to start talking about racism and stereotypes.

D2BR has been present at Twin Cities middle and high schools since 2005. Murray’s group began a year ago. Nearly 30 students meet a couple of times a month during the school day to explore issues surrounding cultural and racial stereotyping and to brainstorm projects that will encourage students to talk about why they have these biases.

On a recent Tuesday morning, students gathered in sixth-grade math teacher Katharine Hunziker’s classroom, along with school behavior specialist Lorenzo Farley and assistant principal Jamin McKenzie. The session started with a video from racial-justice group Race Forward that features a group of black high school boys talking about their experiences with racial stereotyping in school. The boys in the film describe childhood experiences of being accused of doing things they didn’t do, being graded more leniently than their white counterparts, and being accused of “acting white” by black people or “acting black” when they are with white people.

When the 7-minute film ended, Hunziker, who is white, told the group about an experience she had when she stopped at a coffee shop on her way to work earlier in the week.

“I automatically thought, ‘This guy’s going to rob me,’ ” she said. “That’s the reaction that went through my head: that I was going to go in and buy coffee and this guy was going to break into my car. Would I have thought that if it was a white guy talking on a cellphone?”

Hunziker came to school that day and shared her experience with her colleague, Farley, who is black. “‘You’re racist,’ he told me,” Hunziker said.

Posters that challenge racial stereotypes now hang on the walls throughout Murray Middle School. They are a project of the Dare to Be Real group.

“Of course, I was just joking with her,” Farley told the group. But then, he asked Hunziker, “What do you think made you worry about that? What things in your life have made it so that you would have been more comfortable if it was a white guy in front of the store?”

And with that, students began sharing their reactions to the film and Hunziker’s story.

“I know many other people in our school have felt the way they felt in the video but don’t feel comfortable sharing,” said one girl.

Eighth-grader Avani Holcomb reflected on her own experiences as a black girl at Murray: “Just because I’m a tall black girl people think I can play basketball and that I can play sports. My friends can all do track and they can run, and I can’t run that fast.” School coaches say, “Oh, you’re tall; you can play basketball and volleyball and stuff, but I’m not good at that kind of stuff,” Holcomb said.

“I’m kind of wondering why people’s minds jump to stereotypes,” said Stella LaCroix-Dulluhn, an eighth-grader who is white, as she reflected on Hunziker’s story. “Same thing with me: When someone tells a story of someone robbing someone, I picture either a creepy old white guy or like a 20-year-old black guy.”

Seventh-grader Hever Pliego offered a suggestion on what Hunziker could have done differently back at the coffee shop to overcome her fear: “Go up and say, ‘Good morning,’ or make a little conversation, and then go get coffee and then just say goodbye and get in the car.” Pliego got a rousing applause for his suggestion.

As the group’s session wrapped up, Hunziker handed out colored ribbons for the students to tie onto their wrists and wear throughout the day to remind them “to check themselves” when they “might be biased about someone else or think something about someone and it’s totally without any evidence.” The colored ribbons could be a project D2BR could share with the entire school at some point, she said.

Students in D2BR apply to be in the group. Applicants are asked to describe what leadership means to them and to name a situation at school when they had “a courageous conversation about race and [to] explain how you dealt with it.”

“We have a mix of assets [in the group],” Farley said. “Some of them are A students; some of them are C students. We need that because everybody’s got a different perspective, even the kids that have a little rough patch.”

Since joining the group, Holcomb said it’s easier for her to talk about racial problems with her schoolmates. Last year, she was afraid to say something “if something racist was happening, like a kid saying something about another race,” she said. “Now I’m like, ‘Why would you say that? That’s mean.’ ”

LaCroix-Dulluhn “wanted to join because I notice things happening in school, a lot of racist things,” she said. “It doesn’t affect me a lot being a white female, but I notice it happening.”

A seventh-grade African-American boy, who didn’t want his name used, said the group has helped him deal with racist comments directed at him: “If someone’s talking about ‘you’re not smart’ or ‘you can’t do this because you’re this race’ or something, well, now I don’t care. I’m above that. If someone is going to say that, I might as well just ignore it, because they don’t know if I’m smart or not.”

Amelia Moseman said that as D2BR becomes more visible through presentations at student assemblies and the poster project, students are asking about the group. “I also feel like they are more careful about what they say,” she said.