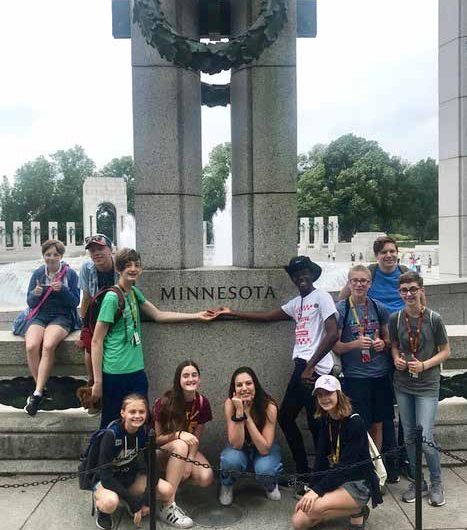 The students, chaperoned by four Murray teachers, spent June 8-14 in our nation’s capital with the primary objective to successfully present their projects built on months of historical research, interpretation and creative expression.

The 2019 History Day theme was “Triumph and Tragedy.” Across categories of their choosing and the topics they selected, Murray scholars excelled in explaining and supporting their thesis statements through primary and secondary sources and their own interpretation. Their commitment and hard work produced triumphant results — at regional, state and national levels.

Kevin Torstenson, an eighth-grader, took second place in the nation for his individual performance of “The 26th Amendment: A Triumphant Alliance.” His 10-minute play was dynamic and creatively demonstrated the coalition that brought voting rights to 18-year-olds during the Vietnam War era.

Alice and Kai were also selected as representatives for the National Endowment for the Humanities (NEH) Day on the Hill. They discussed policy with Minnesota Congress­woman Betty McCollum and Minnesota U.S. Sen. Tina Smith in their Capitol Hill offices along with the NEH Chairman and Murray teacher Courtney Major.

Phoebe Finlay, a seventh-­grader, qualified for nationals in the individual website category with “Frances Kelsey’s Triumph Over Thalidomide.”

Emily Brenner, a seventh-­grader, qualified for nationals in the individual exhibit category with “The Triumph of Women’s Birth Control: Griswold v. Connecticut.”

Murray Middle School has a tradition of excellence with History Day. The research component is embedded into the curriculum at each grade level. Carrie Newman, who teaches seventh-grade U.S. History, was a pioneer of its incorporation. She and Major both emphasize that History Day is a cooperative effort and for some an extended family. Proof of that is the Murray alumni who went above and beyond their required high school work, returning to Murray to voluntarily participate in History Day.

High school sophomores Aaron Ramsey, who attends Como, and Tana Ososki, who attends St. Paul Academy, qualified for nationals when they attended Murray. They teamed up this year for a Senior Division Group Performance of “Mississippi Freedom Summer” and placed fifth in the nation.

Sam Skinner, another Murray alum who qualified for nationals in both sixth and seventh grades, partnered with fellow Central freshman Grace Philippon this year. Their group website of “Finding Honor in Defeat: The Demilitarization of Japan” placed eighth in the nation. They also earned this year’s NHD Global Peace Topical Prize.